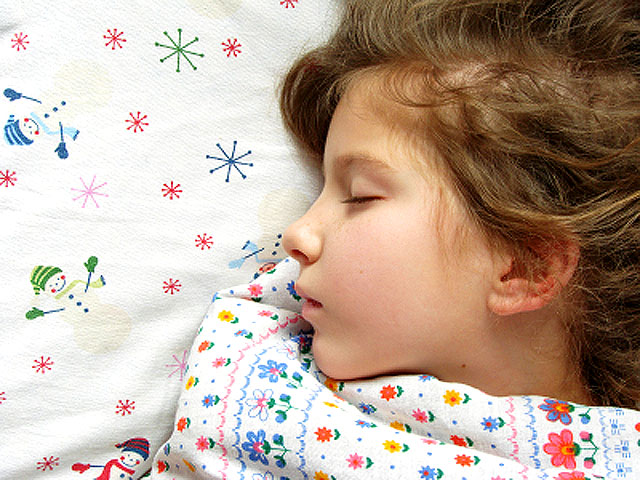 Every parent will tell you that a sleep-deprived child is a cranky child. However, many adults with young kids are not aware of the long-term health problems that may arise for any child who doesn't get enough ZZZs.

The newest studies on sleep and kids find sleep deprivation and sleep-related breathing problems like sleep apnea significantly raise the risk for obesity by early adolescence.

In a 15-year study that involved nearly 2,000 children, researchers at Albert Einstein College of Medicine of Yeshiva University in New York found the more severe these sleep problems were, the greater the risk for obesity.

The findings were published on Thursday in the Journal of Pediatrics.

"When you don't get enough sleep it interferes with the production of hormones that are associated with weight and appetite," Karen Bonuck, PhD, the lead author on the paper and professor of family and social medicine at Einstein, told CBS News. "Sometimes kids stay up late and they'll actually be eating at the time. It has to do with inflammation and insulin resistance."

For the study, Bonuck and her team looked at data from the Avon Longitudinal Study of Parents and Children, which questioned parents in Avon, England, about their children's sleep habits from birth to nearly age 7. The researchers evaluated the children's body mass index (BMI) at age 7, 10 and 15.

Chronic sleep deprivation appeared to be associated with an even higher risk for obesity. Children age 5 and 6 who got less than 10 and a half hours of sleep per night had a 60 to 100 percent increased risk for obesity by age 15. Experts say this age group should get at least 12 hours of sleep each day. However, the researchers did not identify a higher obesity rate among children in other age groups.

Many people, including some physicians, see sleep problems as primarily as an issue that affects adults. Bonuck said, in particular, sleep apnea and snoring have not been tracked together in children over an extended time period of time to examine their impact on weight gain.

"In children the sources of sleep-disordered breathing are different," said Bonuck. "It tends to be related to enlarged tonsils and adenoids and it could be the reciprocal effects of being overweight as well."

Bonuck said these conditions can be treated through surgery. She said doctors are also finding that sometimes a misalignment of the jaw and teeth may be the source of sleep-related breathing problems in children. This condition, known as malocclusion, is easily treated with a night guard and other dental care.

But other measures may also be needed since young kids are likely to carry bad sleep patterns into their teens.

A separate study published on Thursday found that fewer than 1 in 10 high school students -- just 6.2 percent to 7.7 percent of females and 8.0 percent to 9.4 percent of males -- reported getting nine or more hours of sleep each night. The Centers for Disease Control and Prevention recommends that teens get nine or 10 hours of sleep.

Bonuck believes parents and educators must begin to teach children early on about the importance of good sleep hygiene. Currently, as many as 25 to 50 percent of preschool-age children could be categorized as sleep deprived.

Bonuck conducted another study to evaluate the impact sleep education programs for low-income preschoolers. In a randomized study published in 2012 in the journal Sleep, Bonuck and her team worked with a number of Head Start programs in Detroit to test out a sleep awareness program.

Parents attended a 45-minute sleep education program and preschoolers had more than five hours of classroom time in which they learned about the importance of sleep. The researchers interviewed the parents before and after the lesson, and also had them keep a sleep diary. Bonuck said parents in the intervention group were more confident and better informed about how to improve their child's sleeping habits. In follow-ups a month later, the children, on average, were getting an additional 30 minutes of sleep on weeknights.

"Right now, in early childhood education, they screen for nutrition and development," Bonuck told CBS News. "They may do dental screenings in a holistic program like Head Start. But nobody screens for sleep."

Omicron: What we know about the new COVID variant
Jessica Firger