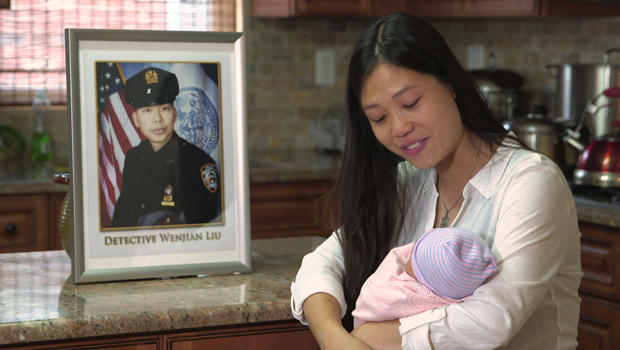 Sanny and Wenjian Liu were newlyweds, married for just three months, when she got the call in December 2014 that her husband, a New York City police officer, was dying. A gunman had ambushed Wenjian and his partner.

They'd been planning to start a family, she told "CBS This Morning," and she had the presence of mind to plan for the future, even at that terrible moment when she saw him dying at the hospital.

Through in-vitro fertilization, Liu's wife delivered a baby girl last week, more than two years after her husband was assassinated.

Just after the death of Wenjian, on that horrible night, Sanny Liu says she knew this day would come.

"I had a dream," she told CBS News correspondent Jeff Glor. "I heard the baby's crying, and handed me the baby. He said, 'Baby, here's the baby. Here's a girl.'"

"You dreamed about him handing you a baby that night?" Glor asked.

NYPD Commissioner James O'Neill was at the hospital. He remembers Sanny asking if doctors could preserve her husband's sperm.

Sanny tells us she proceeded with IVF to honor her late husband. "I want him to have the child to carry on his legacy," she said. "Because I love him. I want him have a child."

Wenjian Liu's daughter will one day learn all about her father's dedication to the job. Sanny says she'll pass on a necklace with his badge number so it can always be close to her heart.

"I will show my daughter that her father was a hero," she said. "Her father make the ultimate sacrifice to make this world a safer place."

Sanny named her daughter Angelina: "She's not only angel from heaven, she's the angel for the NYPD, for all the police officers. I hope she'll bring all the hope and strength to my big blue family ... helping bring the strength and hope to everybody."

Glor asked, "Do you want her to be a police officer?"

But would she like to see her daughter become a police officer? "Of course!"

Both mother and daughter are doing very well. And, Glor adds, Sanny has not ruled out the possibility of giving Angelina a little brother or sister in the future.

As robocalls skyrocket, is the government doing enough to stop them?

Take a hike inside the San Andreas Fault zone