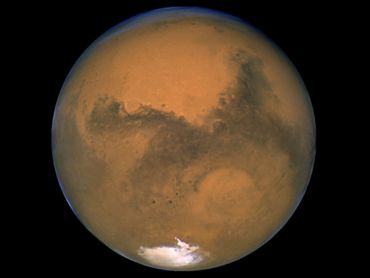 Mars Wednesday morning moved to the closest point to Earth it has been in 60,000 years.

"For astronomers, it's an opportunity to see Mars much closer than they've been able to in the past," said Sky & Telescope executive editor Kelly Beatty on CBS News' Early Show.

The planet moved to a point just 34,646,418 miles of Earth - an opportunity few true skygazers wanted to miss - because it affords the best-ever view of the Red Planet for everyone who is alive now.

"Look to the southeast," said Ed Krupp, director of the Griffith Observatory in Los Angeles. "The brightest thing you will see out there is Mars."

The actual moment of closest approach is 5:51 a.m. EDT Wednesday, but, if you miss it or catch a few extra winks, CBS News Correspondent Steve Futterman reports Mars will continue to shine brightly through September and into October.

"It's so bright, it'll look like the landing light on an airplane," said Jack Horkheimer, director of the Miami Planetarium and host of the PBS series "Star Gazer."

"This is an eyeball event," said Beatty. "Go out when it's good and dark, about 9 o'clock or 10 o'clock in the evening. Look in the southeast, the direction opposite to where the sun is setting, and you will see this brilliant peachy-colored star. It's not a star, it's actually a planet. hrough a pair of binoculars, you will see little white dots, and if you use a telescope you may be able to see the polar cap, which is icy," he added.

Even so, "it'll kind of look blurry any time you look at it," said Krupp, "but as the blurriness continues, there will be these moments of clarity.

It's a big moment for the Hubble Space Telescope, which is taking pictures that scientists predict will be "spectacular."

The first images showing surface details as small as 17 miles across, were taken Tuesday night when Mars is 34.6 million miles from Earth. A full-color photograph of the planet made from those images will be released for the world to see early Wednesday.

"Of course, what people will care most about are the pretty pictures, and they will be spectacular," said Jim Bell of Cornell University, who is leading one of the teams collecting Mars data from the Hubble.

"The pictures we take this week are probably the ones that will be in astronomy textbooks for the next several decades."

A second set of images taken within an hour of Mars' closest approach on Wednesday will show the Red Planet 1,400 miles closer.

The photos are stored in an onboard computer before they are transmitted to the Goddard Space Flight Center in Greenbelt, Md., and eventually to the Space Telescope Science Institute in Baltimore, which will release the images.

This week's pictures will be the sharpest views of Mars ever taken from Earth, or in this case, Earth's orbit. There are spacecraft orbiting Mars that are much closer, but the Hubble has capabilities those craft don't have. The space telescope, for example, can capture ultraviolet wavelengths.

Free of the distorting effect of Earth's atmosphere, the Hubble is routinely used to track atmospheric changes and study Mars' geology. Ozone and water vapor in the Martian atmosphere, for example, are among the items that can be traced by examining ultraviolet light on Mars.

When the Earth and Mars were in a similar position in 2001, the two planets were about 43 million miles apart, said Keith Noll, an astronomer at the Space Telescope Science Institute.

"Is this few percent closer going to make a big difference? I'm not sure about that, we'll have to wait and see," Schultz said. "On the other hand, there is also the subliminal side, the purely humanist side ... the feeling that I was able to say, 'I saw Mars when it was the closest.' That does something to my soul.

"It's a good thing, you know. It's all part of human nature."