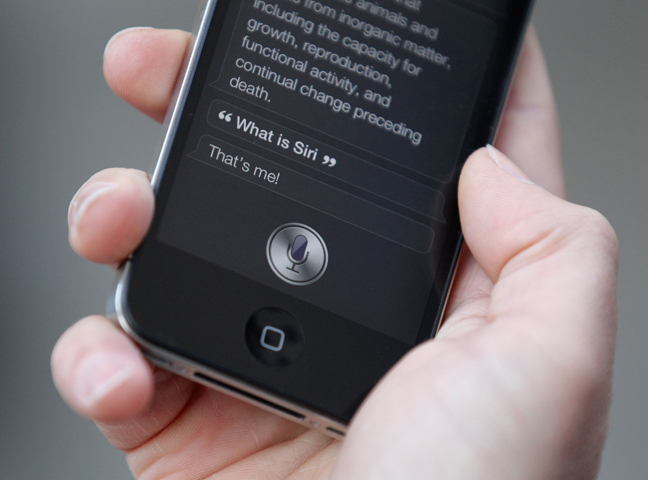 commentary Siri, we have to talk.

This just isn't working, and I think it's your fault.

The problem is, I can't really tell, because you're being kind of sketchy about it. without telling me. Your parents aren't letting on to any of your recent absent behavior, but I'm reading all about it on Twitter and on the news.

I thought things were going pretty well when we first met. You lived to serve, you told me. You helped me remember meetings, figured out where I was going, and even took notes for me when I was feeling lazy. In return, all you asked for was a connection to the outside world, which--I must say--was a pretty sweet deal.

But hey, enough about that. I'm really glad you're back. I just want you to do me a favor, and let me know what's going on when you disappear. Is that so much to ask? I get it, this relationship is kind of new, and we're just figuring some things out, but with you and me, communication is everything.

Siri, I know you're entirely dependent on the Web to work. But that's not so unusual for an iPhone app. For instance, the Maps, YouTube, and Weather apps that ship on the iPhone are completely useless when there's no Internet connection.

But Siri, you're unique among that bunch since you depend not just on those services and Apple's servers, but third-party indexes from Yelp and Wolfram Alpha as well.

There are certain advantages to the system Apple has set up, particularly speed. Every time a user speaks into their phones it sends a clip of that to Apple's servers, where it's processed in a server farm then beamed back. When the network is up this whole turnaround is barely noticeable. It also means it gets better at understanding as time goes on.

But Apple's been down this road before, the one that comes with a new service that depends on the cloud. Last time around that included quite a sputter. But this is nowhere near the kind of .

Worth pointing out though, is that Apple responded to the MobileMe mess by to let people know that there were, in fact, hiccups. That's standard operating procedure in the Web world, and for something as Webby as Siri, it's worth considering putting up such a thing for it too. Companies like Google do that for its free and paid services so people can make sure it's not something that might be wrong with their device, or connection. That may be an admission that there could be future failures, but if this happens again, people would have a better idea of what to do.

So listen Siri, I'm not saying it's over between us. In fact, I'm contractually obligated to be with you for the next couple of years. But let's get these things fixed so I can trust you. And let's make sure we do a better communicating next time there's a problem.