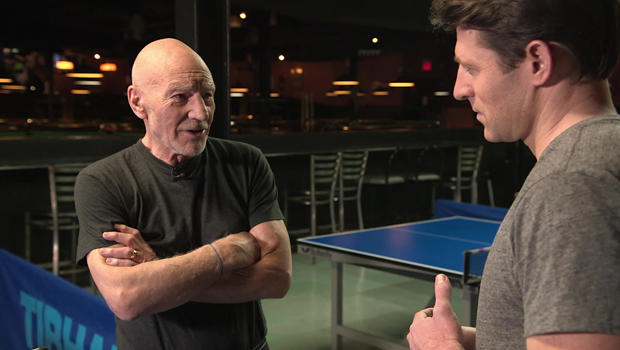 The first thing you should know is the ping pong game happened before the coronavirus, and it was Sir Patrick Stewart's idea.

"What are you trying to communicate right now?" asked "CBS This Morning" co-host Tony Dokoupil, on the other side of the ping pong table.

"I won't say championship point, but match point, 'cause … I'm just trying to convey that there's a little significance about this moment."

"Because this may be the last ball we ever play!"

And it was!  "Great game," said Stewart. "I was thinking about jumping the net. But I think that would've been a little bit too challenging."

"Yeah. I was thinkin' about throwing the racket," said Dokoupil.

It turns out the actor behind such sci-fi gentlemen as the X-Men's Professor Xavier, and Jean Luc Picard, captain of the USS Enterprise, is much more down-to-earth than either his title or his accent might imply.

What's also unexpected is Stewart's celebrated return, in "Star Trek: Picard," a big-budget reboot of the franchise now streaming on CBS All-Access (a part of ViacomCBS). Stewart is also an executive producer.

Dokoupil asked, "Did you always want to contribute as an executive producer?"

"No. I was too naïve, too new at the game of series television," Stewart replied. "And I had so much work to do. I mean, I really, the first couple of years, I didn't have a life or a social life at all. We'd work a five-day week; 13-, 14-, sometimes 15-hour days, especially towards the end of the week. And Saturday morning, I would allow myself a little sleep in. And then I would do my own laundry, which by the way, I still do. It's an obsession with me."

Long before he was knighted by the Queen of England, or hailed by a nation of so-called Trekkies, "P-Stew" (as friends call him) grew up in poverty in northern England. His mother was a textile worker, and his father a war hero who brought some of the battle home.

"He also was, unfortunately, a weekend alcoholic, which meant that weekends were often difficult, troubling," Stewart said.

To escape the chaos, and the noise, Stewart would read in the only place he could be alone, the family outhouse. "Because the radio was on all the time. All we had was a radio. I didn't have a television 'til I was 24. Didn't see television at all. So, being part of a very successful television show feels … good!"

"I thought you were gonna say improbable," Dokoupil said.

Stewart's next refuge became the theater. And at 26, he was hired by the Royal Shakespeare Company, spending the next two decades with the bard, before a chance meeting led to his casting on "Star Trek: The Next Generation."

At first, Stewart struggled at television, as he explained over a post-ping pong beer with his wife, Sonny Ozell.

"I lectured my fellow cast members about some of the fooling around that was going on on the set, and the games that they were playing and the singing and the jokes and the ruining shots," Stewart said. "And there was this horrible silence. And it was Denise Crosby who said to me, 'Trick, come on, we gotta have some fun!' And I said, 'We are not here to have fun.' I said that! And that became, you know, a legendary quote, as I progressively got sillier and sillier as the series wore on."

After seven seasons and four movies, though, he was ready to move on to other roles, only to discover that some in Hollywood struggled to see him as anything but the captain.

"That's what all the writers do all the time," Dokoupil said. "He's an actor."

"Yes, exactly. He's used to that. That Picard was something of an albatross in terms of your creative life."

"That's exactly the word," Stewart said. "And for a while, I went through a stage of thinking, 'Is that it? Is that all I've got? Is that how I shall be identified for the rest of time?'"

"But you pivoted. And you went back to theater," said Ozell.

He and Ozell, a singer-songwriter, met while he performed "Macbeth" at the Brooklyn Academy of Music:

These days, the only escape on Stewart's mind is from the virus.

"I miss work," he said. "This is the longest period in my career, which is well over 60 years now, in which I haven't actually been doing what I do, which is performing, acting."

But even now he's not completely idle.

From his home in Los Angeles, he's been sharing a Shakespearean sonnet a day, returning to the words that he first read as a boy … the words of the Bard that lifted him into a world where no one had gone before.

"Sonnet 18:
Shall I compare thee to a summer's day?
Thou art more lovely and more temperate:
Rough winds do shake the darling buds of May …"

"I had no idea what I was saying or what it meant," Stewart said. "But there was something in the language."

"So long as men can breathe or eyes can see,
So long lives this, and this gives life to thee."