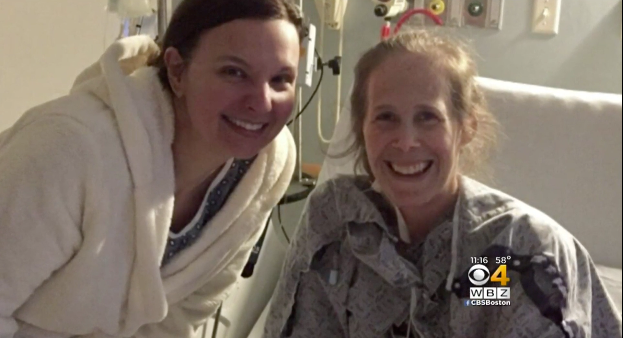 A single mother with two failing kidneys was saved by the kindness of a complete stranger.

"I certainly never set out to be a living donor as part of my life plan," Nicole Baltzer told CBS Boston.

But that plan took a new direction when she read a Facebook post from Kara Yimoyines, a single mom with lupus who was growing sicker, waiting for a new kidney.

"I remember reading it and feeling so bad. This is so unfair," Baltzer said. "That's when it really hit me. I can do something about this. Maybe I'm a match."

She reached out, and the two women discovered they had a lot in common. Though they'd never met, they lived in the same town, Winchester, Massachusetts.

"I work as a web developer. She's a web designer," Yimoyines said.

Not only that: after months of screening, doctors determined they were a perfect match for a kidney transplant.

On a winter morning at Tufts Medical Center, Baltzer gave Yimoyines the gift of a kidney and so much more.

"From not being able to play with my kids and being asleep most of the time. Not feeling good, to recovering who I was a few years ago," Yimoyines said. "Giving me that time back with my children. Allowing me to be involved in their lives in a way I hadn't been."

She said Baltzer's selfless sacrifice is now a priceless lesson for her own daughter.

"I think actions speak louder than words," Baltzer said. "I feel it when I look at Kara. This has been a good thing for everybody."

Every 14 minutes someone is added to the transplant registry list, and every day, 13 people die waiting for one. To learn more about the life-saving gift of organ donation visit www.kidney.org.