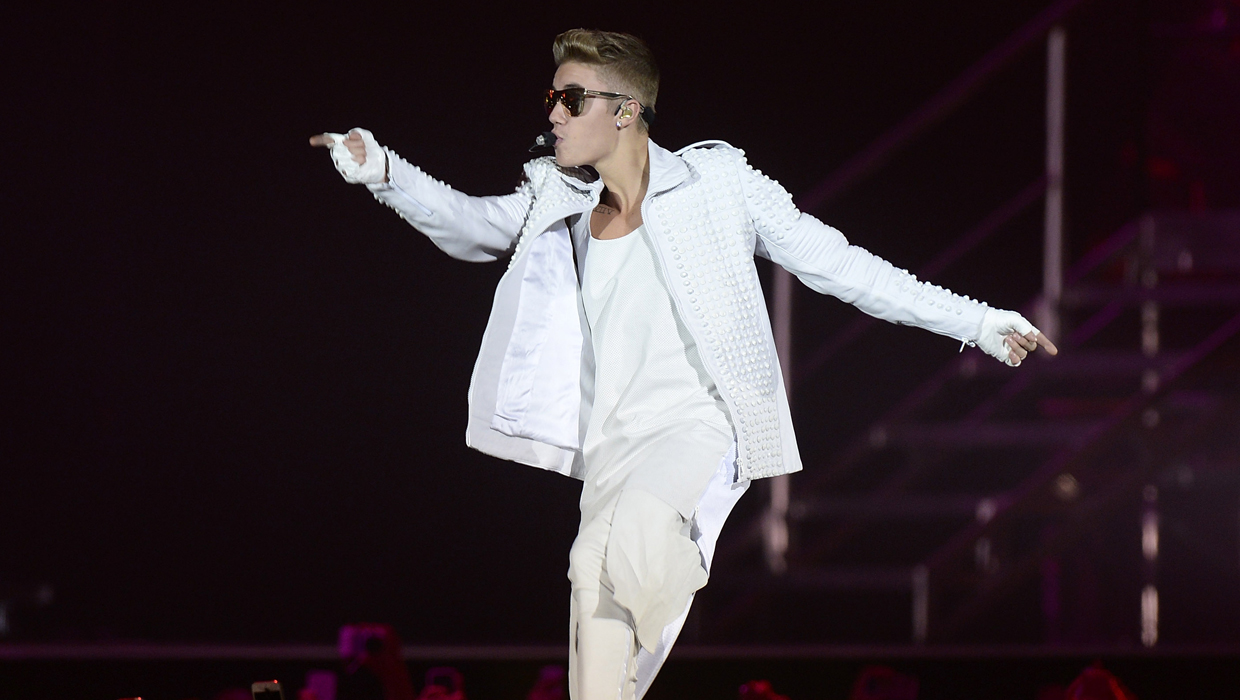 For more than a year, Justin Bieber has had more tabloid hits than Billboard hits: The singer's music career has taken a backseat to his wild boy antics, and a new arrest for a DUI charge marks a new low for the Grammy-nominated pop star.

Bieber's arrest Thursday is another sign of the crazy lifestyle that has taken over the 19-year-old's image -- but a more serious one given the gravity of his alleged offenses. Authorities say Bieber failed a field sobriety test early Thursday and he is facing driving under the influence charges after driving nearly twice the speed limit on a Miami Beach street. Police said he also resisted the arrest and smelled of alcohol.

After he was charged, some key industry watchers were hesitant to talk about the Canadian-born singer's woes and what it would mean to his imploding career.

But rapper Macklemore, 30, was sympathetic. He said if he had become a mainstream musician when he was Bieber's age, people would also see his struggles.

"I think it's challenging for anybody to have your life be a spectacle and to be challenged and critiqued and judged. And it's definitely hard if you've never had any normalcy in your adult life or in your teenage life," said Macklemore, who has struggled with substance abuse. "I think that's very challenging. I think if I had blown up at 22 or 23, I think you would have seen me do some (crazy stuff) in public."

The new year kicked-off in dramatic fashion for Bieber: Detectives searched his California home looking for surveillance footage that might serve as evidence that the singer was involved in an egg-tossing vandalism case that caused thousands of dollars in damage to a neighbor's home. The investigation garnered more attention than his album release, which happened just days earlier.

"Journals" was released in December and has had some success: some singles have hit then Top 40 thanks to digital singles. But it's miles away from the phenomenal, chart-topping success he enjoyed when he debuted as a cherub-faced, soft-voiced teenager in 2009. Since his arrival onto the music scene, he's released multiple platinum albums -- five of which have debuted at No. 1 -- and has clocked hit single after hit single, from "Baby" to "Boyfriend." His full-length 2010 debut, "My World 2.0," was nominated for two Grammy Awards, including best pop vocal album and best new artist, where his loss surprised many.

Bieber hasn't had that kind of success for a while.

His second 3-D film, "Justin Bieber's Believe," flopped when it debuted in December and grossed just $3.1 million during its first three days around the Christmas holiday. In comparison, his 2011 film, "Justin Bieber: Never Say Never," grossed $12.4 million on its opening day and $29.5 million during its opening weekend. Bieber has also lost edge onstage during his recent tour. At a stop in New Jersey in August, he was sluggish onstage and appeared to lip sync throughout the night. He didn't dance as strong as he's done in the past and he seemed to be disinterested at times onstage.

He's remained in the headlines though -- for all the wrong reasons. Last year represented a litany of lows, from clashing with a paparazzo to fainting at a show to being photographed smoking marijuana. Some of his troubles have reached the bizarre: German authorities charged him thousands of dollars after he abandoned a pet monkey that they seized from him for failing to have proper vaccination papers; the singer had to apologize to Bill Clinton after cursing the former president and spraying his photo with cleaning fluid in a New York City restaurant kitchen.

Bieber's manager, Scooter Braun, was being honored as part of Billboard's Power 100 event in Los Angeles on Thursday, but he didn't attend. In an interview with The Associated Press last month, Braun said his client had "got a little bit into trouble," when asked about the formerly squeaky clean singer's woes.

In the same interview, Usher, Bieber's mentor, said his troubles are part of his maturation.

"The beautiful part about it is that those that are invested in a long term story you understand that there are peaks and valleys in every person's life some," the R&B star said. "Unfortunately the reality is he has to live with a camera in front of him, but what he chooses to do on or off camera is analyzed or scrutinized in some off way."

As a result of the charges, Bieber could automatically lose his license for a year and he could face a fine up to $1000 and 50 hours of community service. The ramifications for his career are less clear. There have been plenty of music stars who have been entwined in far more serious legal trouble or scandal, and have rebounded thanks to the power of a hit single and/or an image makeover.

While his fan base may be dwindling, he still has key support from those in the music industry,

"I don't know Justin and I don't know what he's involved in. All I know is if drugs are involved and I hope they are not, they're lethal," music mogul Clive Davis said in an interview Thursday after Bieber's arrest. "He's a young man with strong talent that has really found an audience, so I'm sure we wish him well."

"I guess he could just focus on his career most of all," added Jennifer Hudson, sitting next to Davis. "All we can do is wish him the best, you know. He'll find his way."