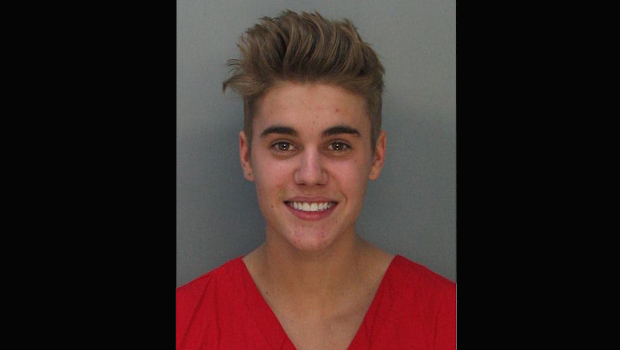 Justin Bieber found something to smile about when posing for his mug shot.

The booking photo, released Thursday, shows the 19-year-old pop star flashing a grin after being arrested on DUI, driving with an expired license and resisting arrest without violence charges after allegedly speeding down a residential Miami Beach street in a yellow Lamborghini on an expired license.

Authorities say Bieber was arrested after police saw him and R&B singer Khalil racing two luxury vehicles down the street at 4:09 a.m., with two other vehicles apparently being used to block off the area. Both Bieber and Khalil face drag-racing and driving under the influence charges.

Police Chief Ray Martinez told a news conference Thursday morning the singer was initially not cooperative when the officer pulled him over. Martinez said the singer also had an invalid Georgia driver's license and admitted to smoking marijuana, taking prescription medication and drinking.

According to the arrest report, Bieber "had slow deliberate movements" and a look of stupor on his face when the officer ordered him to exit his vehicle. The 19-year-old Bieber was placed under arrest after repeatedly refusing to put his hands on his vehicle so the officer could pat him down to look for weapons, the report said. It says he cursed several times at the officer and demanded to know why he was being arrested.

Bieber failed a field sobriety test and was taken to the Miami Beach police station for a Breathalyzer, police said. Results have not been released.

He is being held at a Miami-Dade County jail pending an initial appearance expected later Thursday.