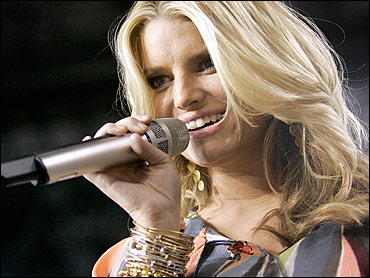 It's not easy being a celebrity, especially as a woman whose body image is constantly being scrutinized.

There's been a lot of buzz over recent pictures of country singer Jessica Simpson in the newspapers and on the Internet showing a little weight gain.

"We have a lot going on in this country. We don't need to have this right now. Because it's almost like anytime a woman gains weight, and she's a public figure, everyone gets all over it. And it's almost like -- we're trying to feed our kids, right?" Emme said.

The media's strong reaction to the new photos of Simpson has sparked a controversy over the perception of body image.

"Yesterday, when I saw the pictures in the newspaper and they made some crack about her looking like she's playing for the Dallas Cowboys as a linebacker, like her boyfriend (Tony Romo), who is the quarterback, I was so mad," Rodriguez said. "Why do they have to pick on her?"

Rodriguez wasn't alone. The issue hit home with a lot of women, who are "upset" and "sick and tired" of the scrutiny.

"First of all," Emme observed, "Jessica Simpson in these pictures, yes, she did gain some weight. But do we have to hang her out to dry for that? She looks beautiful. She really does. Maybe she's not working out four hours a day in the gym. She might be working out one hour a day. There might be some things going on. Yes, she is a public figure, but at this time in our lives right now, when so much else is going on, we need a little bit of a pick me up. We don't need any of this body bashing, especially with these images that are so beautiful."

On the flip-side, Simpson has donned "little Daisy Dukes" and has "flaunted her body and used her body as an asset" so, when she gains a little weight, is it OK to mention it?" Rodriguez, who was playing devil's advocate, asked.

"You are going to take a look and say, 'Yes there is a change. But do we have to call her names? Does it have to be criticized?'" Emme asked. "So many Hollywood actresses and women who are in the media, they have to work so hard to maintain an unrealistic image. So maybe this is a chance for all of to us really start talking about -- are these images truly bad? I don't think so."

Both mothers of young daughters, Emme and Rodriguez admit having more of a personal connection to the issue.

"And we have to talk to them about self-esteem, body issues and tell them it's OK if you're not a size zero or two or four or six," Rodriguez said.

"Whatever it might be," Emme remarked. "We have to take good care of ourselves, and that's our responsibility as women for our own lives so all else falls from that. And we wish Jessica Simpson good self-esteem that she doesn't take this, and all of a sudden, in six months, we see her as a rail-thin individual."

Simpson has addressed this issue in the past. In Harper's Bazaar, she criticized the rail look and said it's not healthy or good for the heart.

"Women have curves. If we didn'thave curves, there would be nothing to hold onto!" Emme joked.

Emme admits that she wasn't too pleased with Oprah Winfrey's public weight gain confession and her comment that she was going to try really hard to lose it.

"It's not that I didn't like what she said. I want, right now, the reaction to the hard work an individual has done, so publicly, and she's our national treasure. Instead of body bashing, perhaps say 'How about we try to do this a little more gentler? Let's figure out a different way that I didn't get to last time. Maybe, with all of the leaders, trainers, gurus, maybe there is something different that I need to do that will get me on a really good path," ' Emme said.

Shw stressed she'd like tol see a "more gentler, more understandable and more real" approach. "Instead of this, 'Oh, I'm so disgusted,' it's like, 'We love you. What are you doing? Why, why, why?' So I think we're all on this journey of self-discovery and to be a little more kinder and gentler to ourselves and to our sisters," Emme concluded.

Why Handwriting Changes as You Age