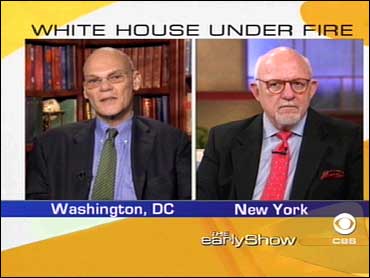 While Washington waits to see if the CIA leak investigation culminates in the resignation of key administration aides, two top political strategists agree that such an outcome might not be the worst thing for President Bush.

told
co-anchor Hannah Storm. "They may lose some people. But de Gaulle was right — the graveyards are full of indispensable men. If they have to resign, it might help them if they get some new people in there, the way it's going."

Carville and Rollins both laughed at that notion.

But Carville said later, "Let's be fair. No one has been indicted, much less convicted yet. If staff changes are made, they should take this opportunity — it strikes me as a place that could stand a shakeup and a couple of changes. A lot of people have been there for a long time. There's nothing wrong with a little new blood."

"As James said," Rollins chimed in, "there's nothing wrong with change, and no one is irreplaceable. There's three more years to go in this administration.

"They gotta get a different focus, and (the president) has to get replacements, obviously, very quickly. Historically, there have been lots of turnovers in the White House. This one hasn't had very many. They're very valuable players but, at the end of the day, a year ago, George Bush was the one who got elected, and he's still got three years to go."

The president's political mastermind, Karl Rove, and Vice President Dick Cheney's top aide, I. Lewis "Scooter" Libby, have been mentioned as possible targets of the investigation.

Carville said he doesn't think the probe is hitting home yet on Main Street, USA.

"Right now, there's a huge disconnect between Washington and the country," he said. "Washington is completely consumed in this, something I haven't seen since the Lewinsky scandal. The rest of the country is not nearly as engaged.

"However, if there are indictments, if the legal system steps in, then the rest of the country will become extremely engaged. Right now, it's correct to say there's a big disconnect between all-consumed Washington and a less-than-involved rest of the country."

Rollins said "there's no question" Iraq is the main issue on people's minds, especially with the U.S. death toll reaching 2,000 and, "as the numbers rise and the longer we stay there — and obviously we have to stay there — the more difficult everything else becomes. Just as James said, people are concerned about the hurricanes and the 2,000 young men and women who have lost their lives. This (the leaks investigation) is a minor issue. It's a major issue in Washington and I don't underestimate the seriousness of it."

Carville added that gas prices and healthcare costs also weigh on average Joes. Still, he said, "If indictments come down, then the rest of the country will check in. But this will just feed the perception in the country that Washington is consumed with priorities that are not their priorities. That's the problem here."

Asked if the president could take a page from the Bill Clinton playbook, in which Mr. Clinton portrayed himself as focused on his duties despite the Monica Lewinsky scandal, Carville said he should try to.

"I think it will help if (Mr. Bush) shows some kind of focus," Carville said. "Now, these things are distracting in the same way a heart attack is distracting. It's kinda hard to think of something else. To be fair, I think President Clinton did show kind of a remarkable capacity to publicly be concerned about other things. I think (Mr. Bush is) gonna have to do that."

And the president shouldn't let the controversy over his nomination to the Supreme Court of Harriet Miers distract him either, Rollins suggested.

"It was not a choice that the conservative base obviously is happy with," he said. "At the end of the day, she's either gonna be the Supreme Court justice or not. And that'll be done in about a month. The bottom line, he's got lots of other things to move forward with on the agenda, and a Republican majority, which is very important."

Carville admitted some satisfaction with the problems enveloping the White House.

"This is the dirty secret of Washington that everybody understands," he said. "All of the opposition party wants the president to be unpopular. OK? That's been achieved. The problem is if you become a failed president with three years to go, then the country really has a problem.

"I think both President Reagan and President Clinton went through a wet patch, slippery spots, whatever you want to call it, during their second terms, but neither became a failed president."

Rollins agreed again, adding that Mr. Bush needs to be able to function as an effective commander-in-chief.