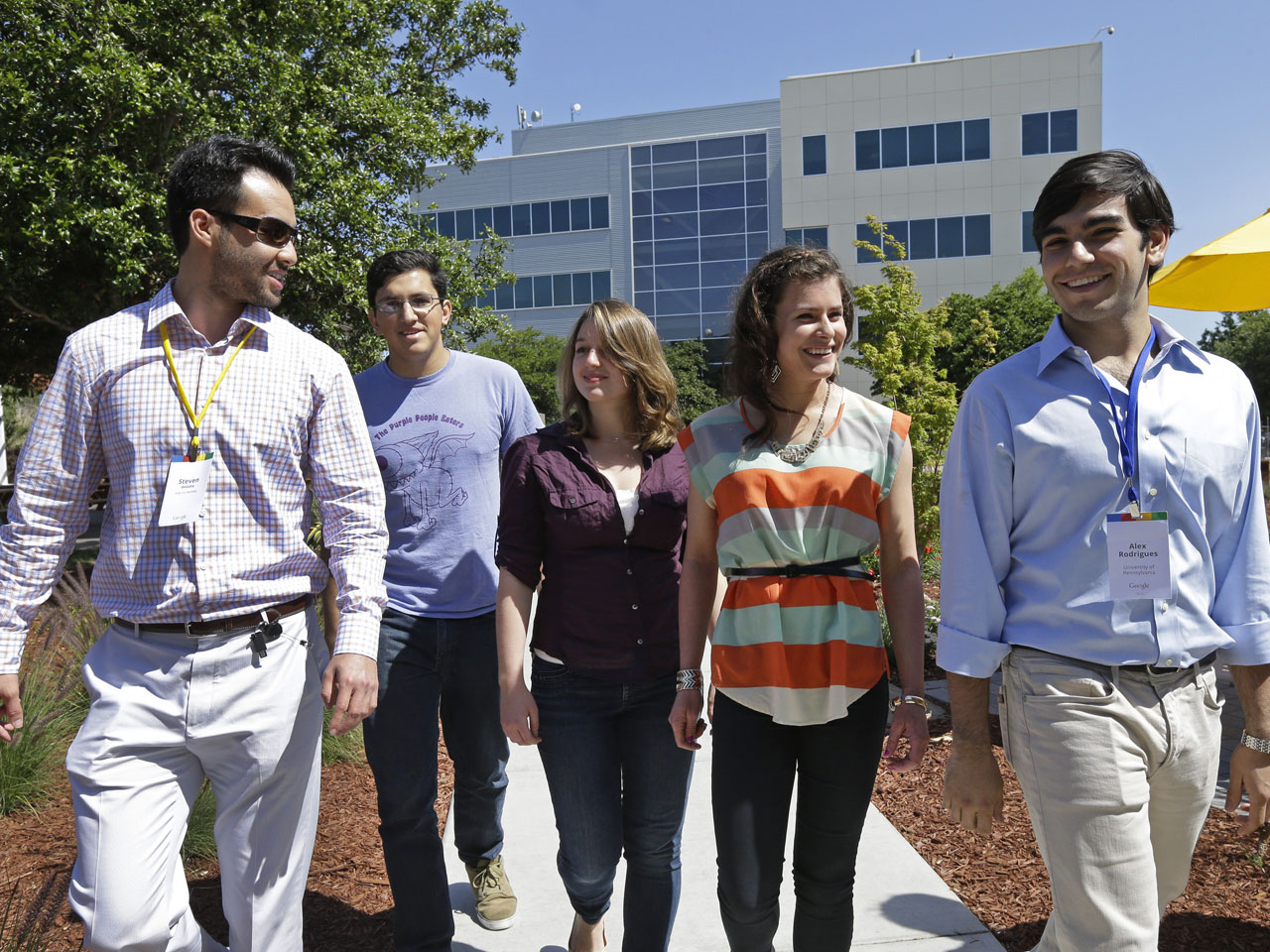 MOUNTAIN VIEW, Calif. - Sitting in a kitchen stocked with free food, a handful of 20-something Google summer interns weigh their favorite perks, but where to begin? With bikes, buses, massages, swimming pools, dance classes, nap pods, parties and access to their tech heroes, it's a very long list.

In the end, however, the budding Googlers are most excited about the work.

"The project I'm working on is super high impact, and I'm looking for ways to make my mark," says Rita DeRaedt, 20, studying visual communication technology at Bowling Green State University in Ohio. She admitted to being a bit star-struck after she was assigned to a team headed by a designer she's long admired.

With summer's arrival comes an influx of thousands of Silicon Valley interns. Well paid and perked, young up-and-comers from around the world who successfully navigate the competitive application process are assigned big time responsibility at firms such as Google, Facebook, Dropbox and Twitter.

Silicon Valley tech firms pay their interns more than any other sector in the U.S., according to a Top 25 list of 2014 intern pay by online career website Glassdoor.

Palantir Technologies, a Palo Alto-based cybersecurity firm, topped the list with $7,012 average monthly base pay. Also on the list: Twitter, LinkedIn, Facebook, eBay, Google and Apple, all of which pay more than $5,000 a month, or $60,000 annually if these were full time jobs.

And that's not counting the perks, which at Facebook even include housing in this high rent region.

Executives hope that a fun and stimulating summer will motivate them to come back after graduation to launch careers. It's money well spent in a field fighting for talent, says Keck Graduate Institute professor Joel West in Claremont, who hired interns when he ran his own software company, and now helps place students at internships.

"When you're an employer, interns are a win-win, because you get relatively cheap labor and you get a first look at talented and ambitious people," he says. "You get first dibs on them."

Indeed, many of the internships turn into careers.

Max Schireson, CEO of database startup MongoDB, with offices in Palo Alto and New York, says they nurture former interns, 35 this summer selected from a pool of 3,000, when they return to their respective schools - primarily Brown, MIT, Stanford and Princeton.

"We try to keep in touch with them both to keep that relationship warm but also because they can help us in identifying our next crop," Schireson says.

Schireson says that while there's solid pay, with food, drink and candy around the office, there are limits. Ultimately, he says, "we want people attracted mostly by the workplace challenges."

But there is an effort to keep hours reasonable, and many said East Coast financial sector interns work longer hours for less pay.

"We believe in paying for work and paying our interns, full stop, but we don't believe in making interns work all hours of the day unnecessarily, and think there are lessons to be learned in terms of managing time and workflow," said Google spokeswoman Meghan Casserly. Overtime is allowed, however, for projects that warrant it, she says.

Chris Crawford was 18, a student at University of California, Santa Cruz, when he landed his first internship at nearby Cupertino-based Apple. He spent the next five summers interning at Apple, two in public relations, three at iTunes.

"I love Apple technology, I'm a musician and I loved what they were doing in the music industry, and I got real life business experience there," says Crawford, who went on to launch his own startup, Loudr.fm, in 2009, an online service where musicians can sell cover songs and original music to fans, or through iTunes, Spotify, Google Play and other sites.

Now and then, he says, their little firm of eight even gets an intern.

Google's head of global staffing Kyle Ewing says the biggest misconception about their interns is that they are all computer scientists from elite universities. Instead, Google, and many other firms, have outreach programs to both diversify their workforce and provide opportunities for non-technical students.

As for the new class of interns, thousands of them, Ewing says she expects them to be tackling major challenges as they sip their sparkly water over the next three months. "Our hope is that we can offer a job to anybody who has a successful summer," she says. "We have a very, very successful pipeline."