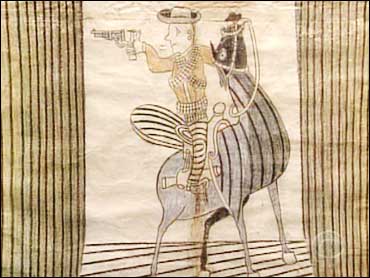 This story originally aired on March 25, 2007. Since then, a large collection of Martin Ramirez's work has been located.

The world of Martin Ramirez is a strange and magical place, filled with trains, cowboys and Madonna's. But the creator, who some critics now call one of the greatest artists of the Twentieth Century, was a homeless Mexican immigrant, and his entrancing images were all created after being committed to the California mental hospital system in the 1930s.

Ramirez' work is now being celebrated in a traveling exhibit at the Milwaukee art museum. It opened earlier this year at The American Folk Art Museum in New York City.

"What this exhibition unveils for the public is that Ramirez's story is a very familiar story, a very familiar tale of 20th Century America," curator Brooke Anderson told Sunday Morning correspondent Anthony Mason.

Ramirez was 30 when he left his small ranch in Mexico to seek work in the promised land of America. He hoped to send money back home to his wife and four children, and for a time found work on the railroads in California. But in 1931, destitute and disoriented, he was picked up by police and committed to a psychiatric asylum, where he was diagnosed as catatonic schizophrenic.

Few outsiders ever saw Ramirez, who would spend the rest of his life in mental hospitals. For much of the 32 years he spent in mental institutions, Ramirez lived in silence.

As a student in the 1950s, painter Wayne Thiebaud was allowed to visit him.

"I was surprised because they told us that he was mute and didn't speak," he said. "This would be the kind of thing he'd pull out of his shirt. And it had a picture that I recognized of what I thought was a shoe. And, I asked him, 'Hey, Zapata?' He said - and the first words he spoke all day was - 'Si.' So, I said, 'Do you have other ones like this? Mismo ese?' And, he says, 'Si.'"

For Thiebaud, today a world-renowned artist, Ramirez's work was a revelation.

"What you look for, I think, if you're interested in painting and drawing, are those things which captivate you in some way, which sort of knock you off your feet for a minute," he said. "You don't quite know what's going on. And along that line, his work has this very riveting kind of attention."

Intense and obsessive, Ramirez returned again and again to the same themes. Gun-toting caballeros - he drew more than 80 of them. Trains emerging from tunnels.

"He loved transportation, whether it was a horse, or a truck, or a car or a train. He was rather enamored of that," Thiebaud said.

Self-taught, he used traditional tools like crayons, but in his own way.

"He'd melt down the crayon into wax and he'd apply the wax with a wooden matchstick," Anderson said. "So his stylus, his paintbrush became the wooden matchstick and that's how you get this very rugged line in all of these drawings."

The conditions were anything but ideal for an artist.

"It was not uncommon to have a fight on the ward, that we had to break up, between these more violent patients. So I think Martin was fearful," said James Durfee who supervised the tuberculosis ward at Dewitt State Hospital, where Ramirez was mixed in with 85 other men of all ages.

Ramirez sought refuge by going under tables. Durfee crouched under a table to demonstrate Ramirez's technique. "I saw him do this for hours," Durfee said.

How many drawings Ramirez did isn't really clear. In the early years, the hospital sent many of his works back to his family in Mexico. But when Ramirez's relatives learned he had been in a ward with tuberculosis patients they were afraid the drawings were contaminated so they burned them.

Ramirez's work might not have survived at all if it hadn't been for a professor at Sacramento State College, Tarmo Pasto, who was researching mental illness and creativity. Thiebaud was Pasto's student.

"And he's I think the first one to take him seriously," Thiebaud said.

On visits to Dewitt, Pasto encouraged Ramirez to keep drawing and began to collect his work. Soon Ramirez's pictures were being exhibited in local museums and today at auction can fetch as much as $160,000.

"I think he had no idea he was making art," Thiebaud said. "He just wanted to make these powerful images, which for him was a little kind of world. And those little worlds in painting and drawing are kind of human miracles."

"This piece of a train and a tunnel is built up from lots of different kinds of paper - candy wrapper bo, greeting card, found paper and pages from a book. The title of that book - you're just gonna die - is 'The Man Who Wouldn't Talk,'" Anderson said. "All of a sudden we all just got shivers because you felt like Ramirez was just rising from the grave saying, 'See, you know, I had a voice. I'm declaring that for you. I made a choice not to talk.'"

But here the story takes a miraculous turn.

After the Ramirez show opened in New York, Brooke Anderson received an e-mail from a woman who claimed she had "a collection of Martin;s drawings."

"I was a little skeptical, as she likes to remind me now," Anderson said.

But the woman, a relative of Max Duneivitz, who'd worked at Dewitt Hospital, e-mailed photographs. The family had nearly thrown the pictures out. They'd barely survived.

"Kept in a pile in a garage in Northern California, on top of a refrigerator, sandwiched between the refrigerator and a sleeping bag," Anderson said. "And I believe at points the owner's cats would sleep on top of the bag."

When Anderson went to California to see them, she couldn't believe her eyes. She was told she had 55 drawings, but it turned out to be more like 140.

"Well, by the time I got to the last one, I think I started crying," Anderson said.

With one discovery, the 300 known works of Martin Ramirez had grown to 440. The new pictures were all drawn in the last years of his life, and some are epic in scale.

There are more of the familiar cowboys, but now blasting trumpets.

"I mean you can hear it," Anderson said. "Becaue he's just exploded this instrument into this exaggerated form, and it's spectacular."

The American Folk Art Museum is now cataloging the new pictures which will be exhibited next year.

For much of the 32 years he spent in mental institutions, Martin Ramirez lived in silence. But he did speak through his drawings. And as more of his work emerges, we are only just beginning to understand what he was trying to say.