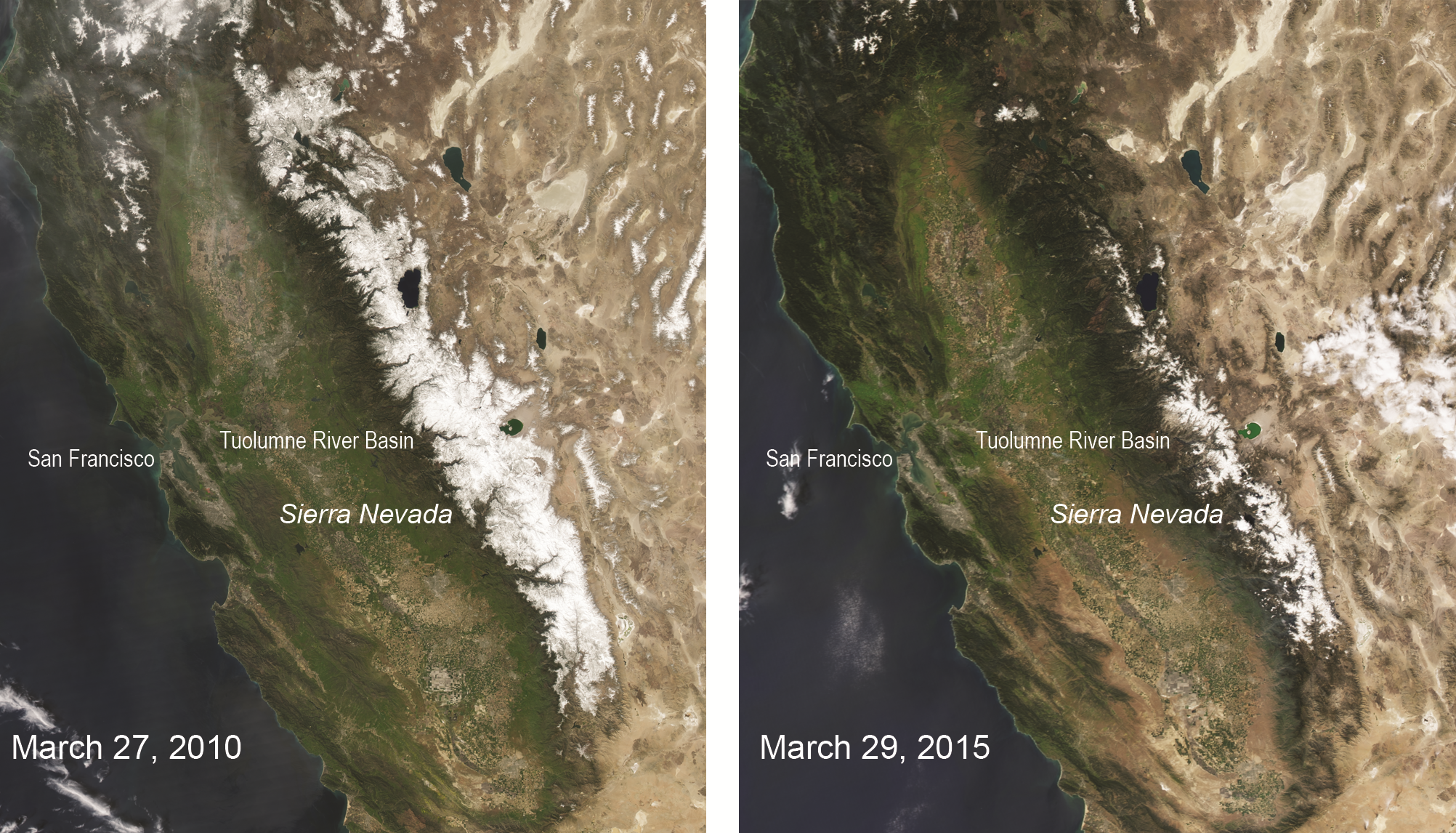 The snowpack in California's Sierra Nevada mountain range - a key source of water for the state - is lower than it has been in the past 500 years.

Higher temperatures and lower precipitation have combined to melt the snowpack, which on April 1 was 5 percent of the historical average from 1951 to 2000. The next lowest snowpack recorded was back in 1977.

The findings, published Monday in Nature Climate Change, show just how bad things have been this past year.

Snow accumulates in the Sierra until April, when it starts to melt. For Northern and Central California, this melting snow is critical to everything from its agriculture sector to its reservoirs.

So, the record low snowpack has further exacerbated a historic drought across California that is in its fourth year and prompted Gov. Jerry Brown to institute draconian water conservation measures.

"The snowpack is really important in California because of the Mediterranean climate. There is no precipitation in the summer. The only time they are going to get precipitation is those winter months," Trouet said, adding that places like Arizona get some relief in the summer thanks to monsoon rains.

"In a climate system like that, it's important to have a natural storage system which is what the snowpack is," she continued. "It allows you to store that extra water that falls during the winter and access that water when the snow melts and there is no rainfall elsewhere."

Trouet and her colleagues had been studying the climate in California for several years. When they heard about the April snowpack reports, they went to work. They combined previously released NOAA temperature data from tree rings and then gathered data from 1,500 blue oaks that can live upwards of 400 years to get the precipitation data.

To go further back, they found dead blue oak trees that were as old as 500 years.

"If you think about what determines the amount of snowpack, there are really two main climate components - the amount of precipitation that falls during winter and second is how warm or cold those winters," Trouet said. "With warmer temperatures, more of that precipitation will fall as rain and also, with warmer temperatures, your snow will melt faster."

When the team looked at blue oak tree rings, the drier years showed up when the tree rings were narrower.

"They are some of the most climate-sensitive trees you can find anywhere on Earth. They are very good recorders of the climate situation in California," she said. "If you think of tree forming a ring every year, the blue oaks like it a lot when there is a lot of water available to them. They really don't like it when it's dry. In a wet winter, the trees will grow a lot and that will be reflected in wider than normal tree rings. In a year with a very dry winter, the trees are going to hold back and not grow a lot and that will result in a very narrow tree ring."

Trouet was careful to say her team couldn't extrapolate the data to predict what the future holds for the snowpack. But she said it probably wasn't good, with temperatures expected to rise in the coming decades due to global warming and things like El Nino offering no relief since increased rain is expected only to fall in southern California.

As a result, Trouet said California would be wise to start considering a future where the snowpack may not play such a central role.

"The whole water management system in California is structured around that snowpack. They are kind of counting on that water for their reservoirs," she said. "If we know more precipitation is going to fall as rain than as snow, then it's really important to adapt the water resource management and see how that rain can be captured in a more efficient way."