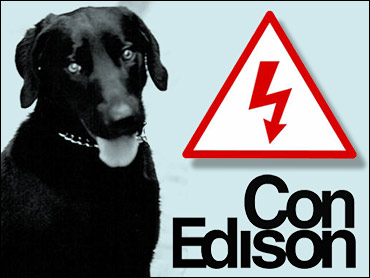 When a New Yorker walking her dogs was electrocuted in January by faulty wiring under the pavement, it seemed like the freakiest of accidents - until several pets in other big cities were killed or shocked in the weeks that followed.

Now utilities are rushing to fix the problems - blamed largely on work crews tearing up the streets - and to reassure the public. Dog owners, meanwhile, are buying booties for their pets to insulate their paws.

"People are getting current up through their arms or their legs," Boston Councilor-at-Large Maura A. Hennigan said this week. "How much more current do they need to get for us to do something about it?"

On Jan. 16, 30-year-old architect Jodie Lane was electrocuted while walking through New York's East Village with her two dogs. Her dogs were shocked first. She noticed they were in distress, and when she tried to help them, she stepped onto the electrified metal cover of a utility box.

An investigation by Consolidated Edison found that utility workers had failed to properly wrap an exposed wire.

In Chicago, a dog was electrocuted Jan. 27 after touching a charged metal grate. City inspectors found clipped wiring under a utility box nearby.

At least three dogs have been electrocuted over the past four years in Boston, which like New York is an old, densely populated city with many underground systems.

George Morton was walking Oscar, his yellow Labrador, through the city's Charlestown neighborhood last month when the dog suddenly froze on the sidewalk, let out a piercing howl and began thrashing about violently. The animal died on the spot, killed by 100 volts from an underground cable.

Humans are generally in less danger than dogs because their rubber- or leather-soled shoes serve as insulators.

Experts say the phenomenon is a result of an ever-expanding network of underground lines and constant digging by work crews.

"It's being caused by contractors that are doing sloppy jobs of cleaning up their mess," said Robert Gonsalves, chairman of electrical engineering at Tufts University. "Contractors will come in and get a permit and dig up the streets and do this and that, and they don't put it back in the right conditions."

In Boston, the main utility, NStar, took out full-page ads in the Boston Herald and The Boston Globe this week, pledging to check more than 30,000 manholes. But they blamed construction crews, not utility workers.

"It is unacceptable when construction crews can damage our system, walk away from a dangerous situation and then assume no responsibility for what they have done," NStar president Thomas J. May said in the ad.

In one Boston case, a dog was shocked after someone dug up a street in Chinatown, destroyed a wire, and then tried to repair it by wrapping it with police caution tape, NStar spokeswoman Christina McKenna said.

The street was still damp from a rainfall, and as the dog walked by a manhole cover, it got a jolt that singed its paws and sent it yelping.

"I've never heard a dog make a sound like that before. It was frightening," said the owner, Nora Hayes.

Some owners are now buying rubber and leather mitts for their pooches' paws.

"We've had a large interest in that since the first news came out a few months ago," said Andy Chan, general manager of a Petco in Boston.