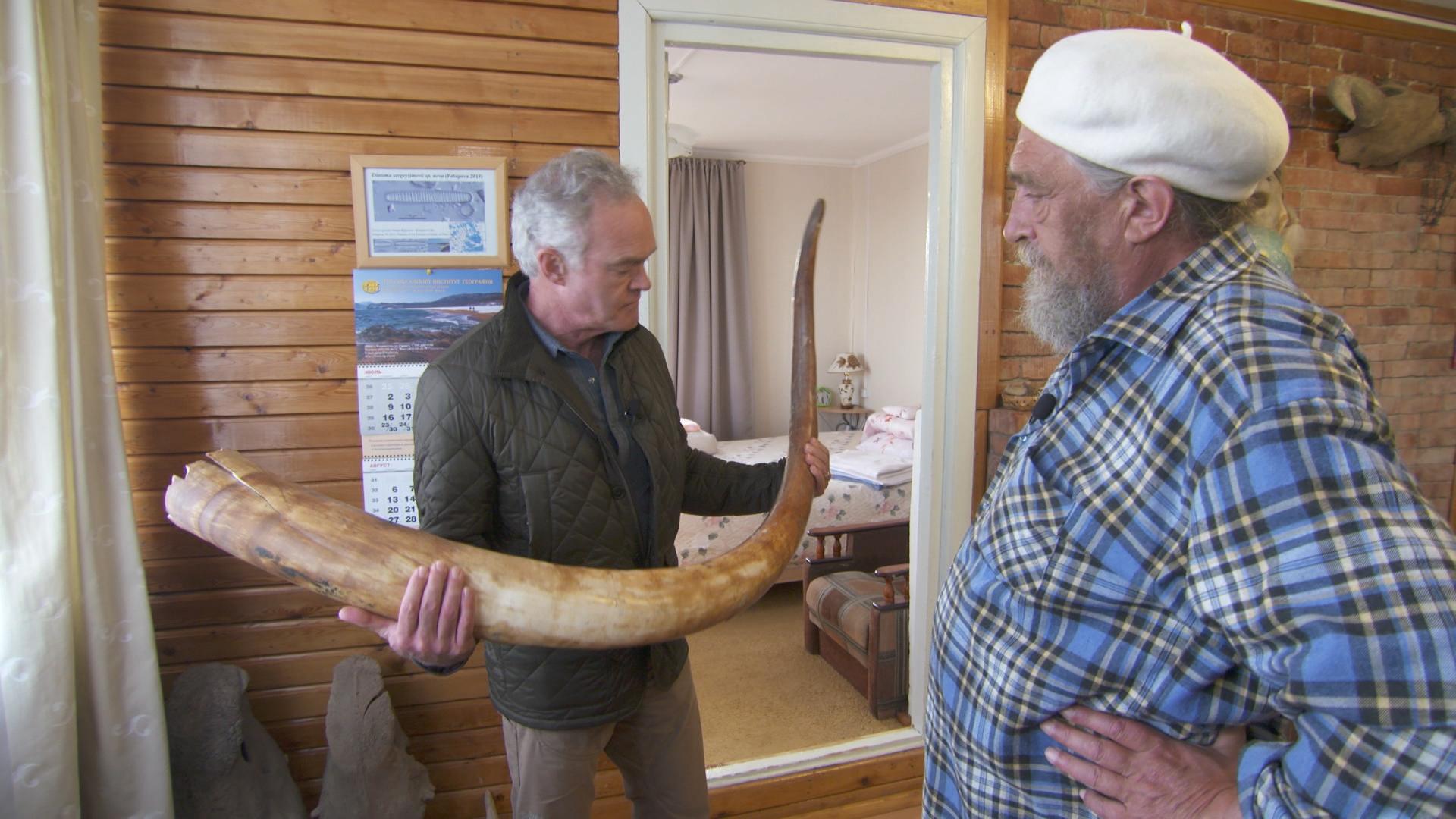 Temperatures in the Arctic continue to warm more than twice as fast as the rest of the world; that's according to the U.S. government's latest climate report. The past six years in the arctic have been the warmest there since records began in 1900. Decades ago, an eccentric Russian geophysicist warned that frozen soil, called permafrost, contained enough greenhouse gas itself to pose a threat to the climate if it ever melted. As we first reported last March, science scoffed at Sergey Zimov's warning but now that the permafrost is collapsing the world is listening. We traveled  to the Siberian Arctic to meet Zimov who has devised a scheme to save the world in a place that he named for the last Ice Age, Pleistocene Park.

Our trip took three days and our final leg in an adventure of geoscience was on an aeronautical fossil, a Soviet-era Antonov. We approached a Siberia we had never seen in our imaginations, a forest touching the horizon in a land sequined with lakes.

This was far north even by a Siberian compass-- above the Arctic Circle where the Kolyma River fills the East Siberian Sea.

Fifteen time zones from New York, we found the aspiring ghost town of chersky. A trading port in Soviet times, Cherksy was gutted by the fall of communism, losing 80 percent of its residents. There's not much reason to visit unless, like many scientists today, you're beating a path to the Northeast Scientific Station to meet its founder, 63-year-old Sergey Zimov.

He welcomed us in summer, when fireweed enjoys a few weeks of liberation. But 40 Siberian winters remained indelible on Zimov's face, the price of solitude for a geophysicist who longed to be remote from his communist bosses.

Scott Pelley: When people hear the word, Siberia, they think about exile. But it sounds to me like exile's exactly what you had in mind.

Sergey Zimov: Yes, only one problem, so long winter.

Winters are long as ever but not as cold. This ground was once so icy, humankind named it permafrost. But in the 1990's Zimov noticed it wasn't so permanent.

Sergey Zimov: It's roof of permafrost.

He can remember when his shovel wouldn't bite the frozen surface. But now he's down more than six feet.

Sergey Zimov: In the past, all our soil, which was melted in summer, freeze everywhere totally and it happened usually in November, December. Now, in all winter it did not freeze.

Scott Pelley: What does that tell you?

This is a warning to the world because organic matter in the permafrost, plants and animals, has been frozen for hundreds of thousands of years. As it thaws, microbes consume that organic matter and release carbon dioxide and methane, greenhouse gases which contribute to a warmer climate.

Scott Pelley: We just pulled this up out of the hole and it's burning my fingers it's so cold.

Sergey Zimov: Yes, soil with water and water is ice. In five minutes it will be melt.

Years ago, Zimov calculated there is enough carbon in permafrost to threaten the world. But big science gave that idea a cold shoulder, maybe in part because of Zimov himself. He endures Siberian winters when most Russians head south. He enjoys a refreshing vodka from time to time, smokes like a Soviet steel mill, and often just lies down to think.

Max Holmes: I sometimes describe him as somewhere between a madman and a genius.

Max Holmes is a leading climate scientist and deputy director of the Woods Hole Research Center in Massachusetts. He told us Zimov's key discovery was that Siberian permafrost held far more carbon than anyone knew.

Scott Pelley: When Zimov made this observation, he couldn't get his papers published in scientific journals.

Max Holmes: it can take a while to get papers published that fly in the face of conventional wisdom.

But science warmed to Zimov's theory and now he's published dozens of papers in science journals. Max Holmes has made several visits to Zimov's station.

Max Holmes: The estimates of how much carbon is locked up in permafrost keep going up. And most of us were probably thinking about the upper meter.

Scott Pelley: The upper three feet or so of soil.

Max Holmes: Yeah, the upper three feet, that's right. If you go down much deeper than that the carbon content is very low. But what's special about this area where Zimov is the carbon content of the permafrost extends to a much greater depth so, consequently, there's an awful lot of carbon that's locked up there.

Scientists estimate there is more greenhouse gas in permafrost than in all of the world's remaining oil, natural gas and coal. There's no consensus about how much of it could be released.

Scott Pelley: How far below the surface are we right now?

Nikita Zimov: Right now, we are about ten meters.

Scott Pelley: So about 30 feet?

Ten times deeper than originally thought, we found the remains of ice age plants and microbes with Zimov's chief collaborator, his son, Nikita.

Nikita Zimov: It's a ticking carbon bomb, as it called.

Nikita Zimov grew up here with his father and sensibly moved south for college leaving behind the old man and the river. But Nikita's plan to be a mathematician melted away when Sergey asked his son to return to see what he had seen. A few hours from the research station there's a vast subsidence of permafrost, sort of a rolling landslide, called Duvanny Yar. Geology is a slow science, but here, it's almost a spectator sport. The bones of extinct woolly mammoths are thawing after more than 12,000 years.

The collapse of frozen earth is happening in much of the Arctic, including Alaska. Twenty-five percent of the Northern Hemisphere is permafrost.

The Zimovs have a theory, many would say a crazy idea, for defusing the carbon bomb. They want to cool the permafrost by returning part of Siberia to the Ice Age, or at least what it looked like in those days known as the Pleistocene Era.

Scott Pelley: If we were standing on this hill in the Pleistocene Era, what would we see?

Sergey Zimov:  Not any trees. This looks like grasslands and savanna. And you will see around 1,000 of mammoths, around maybe 5,000 of bison. Around maybe 10,000 of horses around this place and also lions.

Sergey Zimov: Yes. There was, main predator was lions here.

Sergey Zimov told us when man became the main predator, the woolly mammoth and other large grazers were hunted to extinction. Forest replaced grasslands and that made Siberia vulnerable to a warming climate. Because trees trap more heat than grass. And winter temperatures of 40-below can't freeze the permafrost if there are no herds of animals to trample the insulating snow.

As a demonstration project they call Pleistocene Park, Nikita Zimov is knocking down trees over 54 square miles and restocking the big grazers. The Zimovs believe returning the land to its Ice Age appearance will cool the permafrost even in a warming world.

Scott Pelley: You're trying to bring the animals back now. How can you do that?

Sergey Zimov: Physically, you mean? Or morally? What's-- or financially?

Scott Pelley: All three, but let's start with physically you need what? Hundreds of thousands, millions of these animals?

Nikita Zimov: You need to start with something. Second, you need to prove people that the concept work. And to prove that concept work, you-- for many things you don't need millions of animals.

Scott Pelley: You brought up the moral issue of bringing the animals in here. What do you mean by that? I mean, some people say you're playing God.

Sergey Zimov: You know, I think it's not me playing God. It was our ancestors who was playing God 15,000 years ago. Humans came, and they dropped the number of animals worldwide. And we are just trying to… I don't know, get it back.

This is where the Zimovs' experiment gets crazier. What they need is the greatest tree crusher of the last 20,000 years. And they are surrounded with evidence of the once abundant woolly mammoth.

Scott Pelley: Do you need the wooly mammoth to bring all of this back in the park?

Nikita Zimov: It's like, do you need your right arm to live and do your job? No, you don't need it, but with your arm, you will do it better. So, same with mammoth.

Today one place you might get a woolly mammoth is in Boston, Massachusetts, specifically in the lab of Harvard geneticist George Church.

Scott Pelley: Sergey is hoping that you're going to deliver a mammoth to him. Can you do that?

George Church: I think he's hoping that we will deliver an animal that is very similar to the ones that used to roam there. We need cold-resistant elephants. That's what he would like.

Church is another scientist who's made the trek to Zimov's world. He returned to his renowned genetics lab with dna from mammoth bones.

George Church: If you look at the 23 genomes of the elephants there's lots of evidence of lots of interbreeding all over the place among the different so-called species. So, in a way we're just recreating a hybrid that could easily have existed.

Scott Pelley: When do you imagine you might be able to pull up a truck and deliver this creature to Pleistocene Park?

George Church: I would say that probably in five years we'll know whether we can get this to work for mice, and maybe pigs and elephants. And then if we can get embryos to grow in the laboratory all the way to term, then it's probably a decade.

The Zimovs have not convinced everyone in climate science. Critics say they lack long-term temperature records of the permafrost and their work is restricted to a relatively small area.

Scott Pelley: You know, to the untrained eye someone could come away from a meeting with Sergey thinking that he's a crackpot.

Scott Pelley: But as a climate scientist, how do you evaluate him?

Max Holmes: I think he's usually right. Certainly he has controversial ideas. And a lot of them I think end up being supported over time.

Scott Pelley: What do you think of his concept of Pleistocene Park?

Max Holmes: Fascinating theory. I'm fascinated by the science that can be done to figure out if it's correct.   I'm glad he's pursuing this. We need to think about solutions.

The Zimovs have little funding for their big idea. The government donated the land. And their income flows from the rent that they charge visiting scientists for the research station. Theirs is science on a shoestring with a very long timeline.

Scott Pelley: Sergey, you've devoted your life to this. But I wonder why you thought it was important that Nikita devote his life to this.

Sergey Zimov: Why it's important? Hmm. Our experiment, it's long-time experiment. Decades. Decades.

Sergey Zimov: Yes. And it's also, we think about my grand-grandchildren.

They have some intriguing results in the early days of Pleistocene Park. Data show the permafrost is becoming colder where heat trapping trees have been cut down. It's a little more weight on the genius side of the madman scale and perhaps early evidence that resurrecting the future of the world may depend on burying Siberia's past.

New animals have arrived at the park since our story first aired last March. Not mammoths, but a dozen bison from Denmark. It took Nikita Zimov and his crew more than a month to bring them by land and river to their new home.

The smartest dog in the world