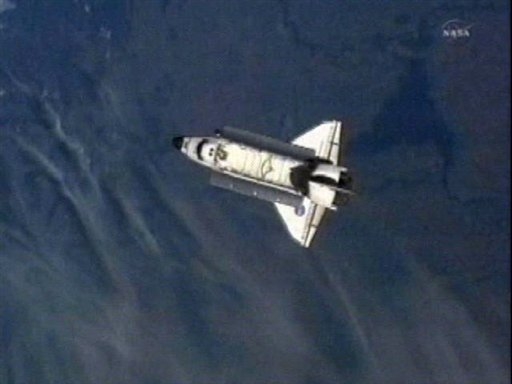 KENNEDY SPACE CENTER, Fla. - The shuttle Endeavour undocked from the International Space Station for the 12th and final time late Sunday, backing away for a fly-around photo survey before moving back to within 1,000 feet or so to test navigation sensors and software intended for use in NASA's next generation manned spacecraft.

Sailing 220 miles above Bolivia, the shuttle's docking system disengaged its counterpart on the space station's forward port at 11:55 p.m. EDT, and the orbiter pulled away directly in front of the lab complex, reports CBS News space analyst Bill Harwood.

"Houston and station, we have physical separation," an astronaut radioed as the two spacecraft separated.

"Thanks, Ron. We appreciate all the help," shuttle commander Mark Kelly replied.

"It was a pleasure serving with you boys," Garan said.

The astronauts plan to test Endeavour's re-entry systems overnight Monday and to pack up early Tuesday for landing back at the Kennedy Space Center around 2:35 a.m. Wednesday. It will be retired to a California museum after this 16-day journey, its last.

Kelly got a special musical send-off late Sunday night from his wife, Rep. Gabrielle Giffords. She's recuperating in Houston from a gunshot wound to the head.

The wakeup call was a song by a Tucson, Ariz., band. Kelly said the song, "Slowness" by Calexico, is about two people reaching across a distance, and references places in Tucson, the congresswoman's hometown.

"I know she really, really wants to get back there," he radioed. "It's an appropriate song because that's coming soon."

Following standard practice, Endeavour pilot Gregory Johnson was at the controls for undocking, guiding the shuttle to a point about 400 feet directly in front of the outpost before kicking off a slow 360-degree photo-survey fly around, looping up above, behind, below and back out in front of the laboratory at a distance of about 600 feet. A small rocket firing was planned to put Endeavour on a trajectory carrying it back above and behind the station.

Kelly was expected to take over at that point to carry out a partial re-rendezvous to test navigation sensors and software developed for NASA's next-generation spacecraft, the Multi-Purpose Crew Vehicle.

"It's the first time we'll be doing a re-rendezvous with space station, and it's a different kind of rendezvous," Kelly said in a NASA interview. "The plan is after we undock, we'll go out to about 400 feet, we'll do a fly-around like we normally do, and then when we come up back in front of the space station again, we're then going to do this series of burns where we're going to fall behind.

Originally designed for the Bush administration's Constellation moon program, the four-seat MPCV capsule, known as Orion, is being developed by NASA for future flights to a variety of deep space targets, including the moon, near-Earth asteroids and, eventually, Mars.

Known by an acronym that's a stretch by even NASA standards - the Sensor Test for Orion Relative Navigation Risk Mitigation - the STORRM sensor package is mounted in the shuttle's cargo bay. It includes a high-definition camera and a laser that will flash on and off 30 times a second to "illuminate" targets mounted on the space station.

By analyzing reflected laser light, STORRM software can compute the distance between the two spacecraft and their relative velocity.

The STORRM equipment was astronaut Andrew Feustel during Endeavour's approach to the station May 18 and engineers said it worked well. Since then, the recorder used to store data from the high definition docking camera failed and the camera is not expected to be available for the post-undocking rendezvous test.

"It looks likely we won't be able to record any docking camera data for the undock and re-rendezvous," said Heather Hinkel, the principal investigator. "So that's a big disappointment to the STORRM team. We're really fortunate we got great data on rendezvous, we met about two thirds of our objectives already."

As for the post-undocking test, "whatever we get will be sufficient," she said. "The re-rendezvous was designed to meet the (laser scan) objectives. So we have our primary objective coming up at that long range on that re-rendezvous trajectory. ... We were fortunate that we got as much as we did (during Endeavour's approach to the station). We feel we'll have been able to assess enough to feel that camera will be a good camera to use for Orion."

Shuttle Flight Director Gary Horlacher said the STORRM laser system "will be taking data all the way out until the sensors drop lock outside 20,000 feet. Then we'll go ahead and do an orbit lowering burn, which is going to bring us down below the space station and get us set up for the trajectory to mimic the Orion approach to the space station."

That trajectory is "designed to have us stall out about 1,000 feet below and 300 feet behind the space station," Horlacher said. "And then orbital mechanics will pull us down and away. STORRM sensors will continue to take data until the sensors drop lock. And when we get outside that range, we'll go ahead and call the docked mission complete and then we'll get our nominal water dumps accomplished and get the ship prepared to come back home."

Horlacher said STORRM represents "an outstanding way to take advantage of the spaceflight capabilities we have today with the shuttle and the space station to demonstrate new technologies that will be used for future spacecraft."

"This capability is being designed for Orion, but is absolutely applicable for any spacecraft doing dockings, in lunar orbit, in Mars orbit, anywhere," he said. "To me, it's a very significant progression of advancing technologies for future applications."

A final separation burn is planned for 4:38 a.m. With the STORRM test complete, Kelly, Gregory, Feustel and their crewmates -- Michael Fincke, Gregory Chamitoff and European Space Agency astronaut Roberto Vittori -- will wrap up a busy day and go to bed at 10:56 a.m. They plan to test the shuttle's re-entry systems overnight Monday and to pack up early Tuesday. If all goes well, Kelly will guide Endeavour to a landing back at the Kennedy Space Center around 2:35 a.m. Wednesday.

A few miles away, engineers will be wrapping up rollout of the shuttle Atlantis to pad 39A for work to ready the ship for launch July 8 on NASA's 135th and final shuttle mission. Rollout is scheduled to begin at 8 p.m. Tuesday, a few hours before Endeavour's re-entry begins.