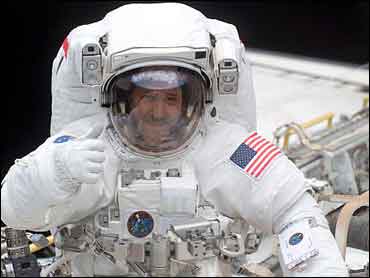 Repairing the space shuttle heat shield in orbit may be simpler than NASA once thought, requiring one of the most basic of home repair items — a foam paint brush.

NASA administrator Sean O'Keefe said that engineers studying ways for spacewalking astronauts to fix a hole in the panels that protect the space shuttle from re-entry heat have found that an ordinary foam paintbrush could be used to spread a special compound while the craft is in orbit.

Designing and testing such a repair kit is a key part of NASA's efforts to return the space shuttle to orbit in the wake of the Feb. 1 accident that destroyed Columbia and killed seven astronauts. The Columbia Accident Investigation Board determined that the shuttle was destroyed when superheated air entered a hole in the heat shield on the leading edge of the left wing and melted internal aluminum supports. The CAIB called for the space agency to develop a way for spacewalking astronauts to repair such heat shield damage.

Astronauts on Columbia and engineers in Mission Control were not aware of the extent of damage to the shuttle wing, but officials said that, in any case, there was no equipment on board the orbiting shuttle to patch the wing even if the problem was recognized.

O'Keefe, at a news conference on Wednesday, said that engineers had looked at the problem prior to the Columbia accident and concluded that it would require highly technical tools and a very difficult spacewalk. For that reason, no repair kit was ever flown on the shuttle.

But with a fresh look at the problem, he said, engineers have determined that patching a heat shield hole may be "elegantly simple."

He said experts have developed an applicator that would squirt two compounds into a heat shield hole. The compounds would chemically combine to make a strong patch that would expand when heated by the friction of re-entry, O'Keefe said.

"The easiest way to spread the compound without having it stick to the instrument turns out to be a simple thing — a foam brush," he said. Such a brush is commonly available at hardware and paint stores and is routinely used by millions of homeowners when painting their houses.

For spacecraft repair, said O'Keefe, the foam brush is "an elegant piece of hardware."

O'Keefe said the compound, which he did not identify, has been tested with an electrical arc at 3,000 degrees, the temperature encountered during shuttle re-entry. Spacesuited astronauts, he said, are testing application of the compound in a zero-gravity airplane, a KC135 that can be flown in a way to give a few seconds of relative weightlessness.

The administrator said the patching technique is still being refined, but the early studies show the problem may be relatively easy to solve.