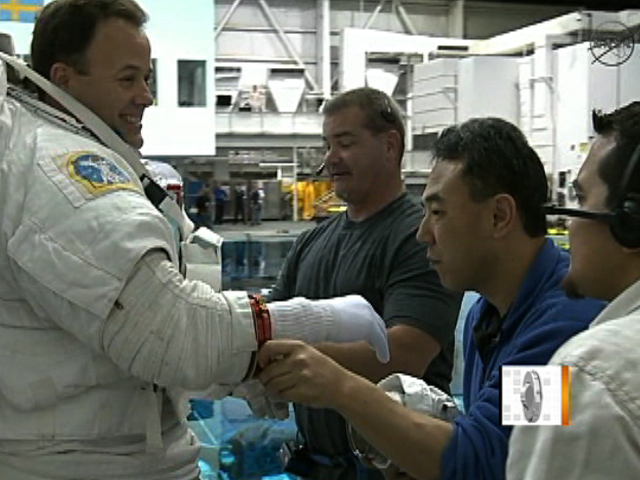 It's estimated that 9,000 jobs will be lost when NASA's shuttle program ends with the launch of space shuttle Atlantis.

CBS News Correspondent Kelly Cobiella reported the jobs lost add up to about $600 million in wages that will no longer be pumped back into the local economy -- a big hit at a bad time.

After Atlantis launch, what's next for NASA?

Among those losing their jobs are residents in the town of Titusville, Fla., near Cape Canaveral.

Travis Thompson is one of the workers there who will soon be unemployed. Thompson is part of the closeout crew that has helped astronauts get ready to launch for the past 28 years.

He told CBS News, "My job is to put astronauts in space ships, and America is not going to be doing that for a little while, so I need to find some work."

Rob Summers, who owns a T-shirt printing shop in Titusville, says NASA is his best customer.

He said, "They estimate that, for every job lost on the space side, we'll lose two jobs in the city, so it's a big ripple effect."

NASA, he says, currently drives his business up to 50 percent.

Orders from other companies have dried up. Summers lost his home to foreclosure last year. He's hoping to save his company by taking it online.

Summers said, "If you drive down the street, the main thoroughfares in Titusville, it's not unusual to see a third of the businesses empty."

When asked if he's worried, Summers said, "Absolutely. I think everyone in this community is very worried."

When the Apollo program ended in the 1970s, Titusville became a ghost town. The shuttle program brought it back to life.

She said, "The overall economy and gas prices have affected business here at our restaurant worse than the shuttle layoffs."

Cobiella added on "The Early Show" the shuttle layoffs have come in phases over the past two years, so it's not one big hit. The final layoffs will happen after the shuttle Atlantis mission is over. Cobiella said there's no doubt there will be a knock-off effect, but the question now is how big the fallout will be.

Rubio said, "There's a national security component to the space program, there's all kinds of economic and commercial applications developed in space, so I think the impact of it will be felt across the country, including in Texas and other parts of the country where there are contractors. ... Right now, we don't have anything to replace the shuttle, and that's why these folks are hurting."

Rubio said the cost of space travel now for the U.S. should be a concern.

He said, "From now on, we have to pay the Russians $50 million-an-astronaut to send Americans to the space station. And we have no plans to have anything in place to replace the shuttle any time before 2016. For Washington, it should be ashamed it took so long to deal with this, and that something's not in place. But it's important for America moving forward, because China, India, are investing heavily in their space programs. We cannot afford as Americans to lose space supremacy."

"Early Show" co-anchor Chris Wragge asked about private companies, such as Sir Richard Branson's Virgin Galactic endeavor, to commercialize space travel. Is that the next best option for space flight?

Rubio said the commercial sector will have a role in lower orbits, but the big concern is space discovery.

"The real big gains in terms of going places we haven't been before ... has to be a function of NASA," he said. "The commercial aspects ... will absorb some losses and that's a positive development; it's something we should encourage. But reaching out there and doing things we haven't done before -- that's still going to fall on NASA, and rightfully so."