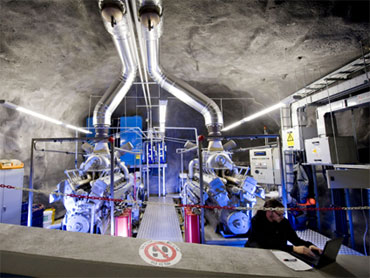 Four months after the shuttle Discovery's long-awaited return to flight last July, NASA engineers still don't know what caused a large piece of potentially dangerous foam to break away from a so-called PAL ramp on the side of the ship's external fuel tank.

Complicating the picture, engineers recently found nine small cracks in the hydrogen PAL ramp of another tank, one that went through two supercold fueling cycles at the Kennedy Space Center last spring before it was replaced with a different tank to resolve other problems.

Figuring out how to keep the long, hand-sprayed foam wind deflectors intact is driving NASA's launch schedule, reports CBS News Space Consultant Bill Harwood. Despite the loss of one to three months due to the impact of Hurricane Katrina, agency managers hope to have Discovery ready for another launch next spring.

But shuttle program manager Wayne Hale said Tuesday that assumes engineers figure out what to do about the foam problem that marred Discovery's July launching.

"Guys, people talk to us about schedule pressure," he said, bristling somewhat after a question about the presumed May launch target. "I'm going to tell you something. The only people I get schedule pressure from is the media. We have not set a launch date. I've said that, I don't know how many times, in media briefings. We have not set a launch date. We are working through the investigation.

"We have assessed the schedule and if the testing gets completed as is planned, and if it comes out the way we think it might likely come out, then we think there is a probability that we will be able to launch in May. But we have not set that as a schedule, it is not driving us.

"I'll put this in very simple words and plain English. The results of the technical investigation are going to allow us to fly. We are not driving to a date on a calendar that was set arbitrarily. We're not allowing ourselves to be driven to do something stupid. We are not doing that."

That said, the next realistic shuttle launch window opens in May with the shuttle Discovery and external tank 119. Assuming a liftoff on May 3, ET, 119 must be shipped from Lockheed Martin's Michoud Assembly Facility near New Orleans to the Kennedy Space Center by around Feb. 2. The trip by barge takes about five days.

Another tank, ET-120 — the one with cracks in its hydrogen PAL ramp — would need to be at KSC by around March 23 to support a possible June rescue flight by the shuttle Atlantis.

Having a second shuttle on standby, ready to carry out an emergency rescue mission in case of major problems, is a post-Columbia safety enhancement. NASA managers will meet in December to discuss whether flights beyond Discovery's will require such standby rescue missions.

The shuttle's external tank is made up of a large hydrogen tank, a so-called intertank section and an upper oxygen tank. Gaseous hydrogen and oxygen, used to pressurize the tanks, are diverted from the propellants feeding the shuttle's main engines and routed up the tops of the tanks in externally mounted pipes. The pressurization lines run next to a long cable tray that carries electrical lines that route data and commands between the shuttle and various tank and booster subsystems.

"Those two pipes carry the pressurization gas, hydrogen and oxygen, that are bled off the main engines that keep the pressure up inside the tank," Hale said. "You can't fly without pressurizing the tanks."

When the shuttle was designed in the 1970s, engineers believed shock waves during the vehicle's transition to supersonic speeds could cause potentially serious damage to the pressurization lines and/or the cable tray. As a result, the tank was equipped with two protuberance air load, or PAL, ramps, one running along the upper section of the hydrogen tank and the other along the outside of the oxygen tank.

The ramps are built up by workers at Michoud, who manually spray on foam and then sculpt it, making ramps that smooth the flow of supersonic air over the pressurization lines and cable tray.

The shuttle Columbia was destroyed by foam insulation that broke away from a different area of the tank during launch in January 2003. That foam was eliminated during the post-disaster recovery. But during Discovery's flight last July, a large piece of the hydrogen PAL ramp broke off.

"With all the testing we've done so far, and we're only part way into it — we expect to complete our testing, by the way, between mid December and mid January — we haven't found any 'eureka,' or smoking gun so far," said John Chapman, external tank project manager.

Hale said engineers are assessing three options. All three require the PAL ramps on existing tanks to be removed:

"In the long run, we have decided we would like to remove this fairly large piece of foam, just eliminate the hazard that it might cause," Hale said. "We think we have a very strong case to be ready to take that ramp off by the third flight tank. Some folks believe we can accelerate that and potentially even remove it for the STS-121 tank."

STS-121 is NASA's designation for Discovery's next mission. But Hale said the amount of testing required to prove the ramps can be safely removed could take until next fall to complete.