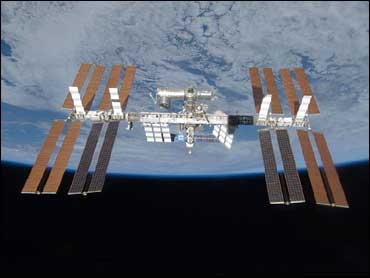 The Discovery astronauts prepared for their return home Saturday, checking out the space shuttle's re-entry systems and packing for the glide back to Earth to close out a challenging space station assembly mission.

Forecasters also are predicting a slight chance for a broken deck of clouds at 5,000 feet that could cause problems.

A second Florida landing opportunity is available one orbit later, at 3:13:59 p.m.

Meanwhile, a Soyuz spacecraft TMA-13 carrying Russian cosmonaut Gennady Padalka, NASA astronaut Michael Barratt and spaceflight participant Charles Simonyi is closing in on the International Space Station, after blasting off from the Baikonur Cosmodrome in Kazakhstan on Thursday.

Docking is scheduled for Saturday morning.

After being awakened this morning (to the tune of Van Morrison's "Bright Side of the Road"), Discovery's Commander Lee Archambault, pilot Dominic "Tony" Antonelli and flight engineer Steven Swanson began powering up and testing Discovery's flight control systems early this morning.

A final public affairs event is scheduled for 1:03 p.m. when the astronauts will field questions from school kids at Punahou School in Honolulu, Hawaii. 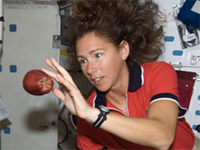 (NASA)
Returning to Earth after four months in space, Magnus (left) will make the trip home resting on her back to ease her return to the unfamiliar tug of gravity. The crew is setting up a reclining seat on Discovery's lower deck for her.

Later this afternoon, the astronauts will check out their pressure suits.