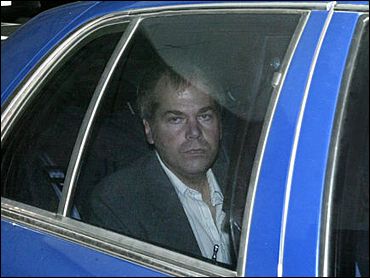 John Hinckley Jr.'s mental health is improving, his therapist said in asking a federal judge to allow the man who shot President Reagan to visit his parents without supervision.

Reagan's family and the government oppose the idea.

At a hearing Monday, psychologist Sidney Binks testified on Hinckley's request to U.S. District Court Judge Paul Friedman to leave Washington's St. Elizabeths Hospital unescorted and visit his parents at their home. Five of the 10 proposed trips would be overnight visits.

"Do you believe you know what John Hinckley is thinking?" Hinckley lawyer Barry Levine asked Binks at the conclusion of Monday's daylong testimony.

"To the best of my ability, yes," Binks said.

"Do you know him well enough to say the court should grant the conditional release?" Levine said.

Government lawyer Robert Chapman suggested that Hinckley still posed a danger and questioned whether he was being evasive.

The hearing was to continue Tuesday, and a decision is expected later this week.

Hinckley has lived at St. Elizabeths since his acquittal by reason of insanity in the March 1981 shooting of Reagan and three others outside a Washington hotel. Hinckley, 48, said he shot the president to impress actress Jodie Foster.

White House press secretary James Brady was seriously wounded in the assassination attempt, along with a Secret Service agent and a Washington police officer.

Under a 1999 federal appeals court ruling, Hinckley has been able to take supervised day trips off hospital grounds. Now he wants to travel unescorted to his parents' home in Williamsburg, Va., some three hours away.

Hinckley sought similar privileges three years ago, but U.S. District Judge June Green canceled a hearing after prosecutors said he had a "continued interest in violently-themed books and music."

Hinckley was at the hearing but sat quietly with his lawyers as Binks, who has treated him for four years, testified.

Binks said Hinckley regularly feeds the stray cats at St. Elizabeth's and reads books about cats, as well as magazines and newspapers.

"He worries about his actions being misinterpreted," said Binks, adding that Hinckley has stopped reading most other books out of fear they would be perceived as violent.

Chapman suggested the pared-down reading list might be an attempt to put up a false front, a possibility acknowledged by Friedman in overruling Levine's objection to a series of questions.

"Maybe he's not reading the books that he's very much interested in because he's learned what to be deceptive about," Friedman said.