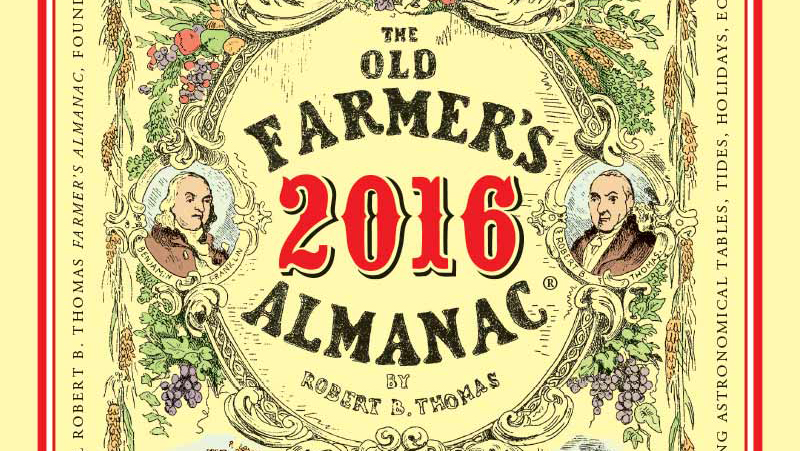 The "Old Farmer's Almanac" has been releasing folksy forecasts, moon charts and sage wisdoms since 1792. But when its 2016 weather predictions came out over the weekend, calling for a wicked winter in the East and flying in the face of the latest governmental guidance on El Niño, meteorologists and weather aficionados questioned and outright mocked the historic text.

"The almanacs are certainly fun and even have useful information, but it is important for the public to understand that modern weather forecasting uses advanced computer models and technology -- and is actually pretty good out to about a week or so," Dr. Marshall Shepherd, director of the University of Georgia's Atmospheric Sciences Program and writer of a weather column on Forbes.com, told CBS News.

While many put stock in tradition, experts like Shepherd warn not to take the Almanac too seriously.

Perhaps no one takes that to heart more than the Almanac's editor of 15 years, Janice Stillman, who points out that the book has lasted 224 years (the first edition came out while George Washington was president) because of a little bit of luck and because the founder, Robert B. Thomas, decided his almanac would be "useful, with a pleasant degree of humor."

The slogan, along with the founder's face, graces on the cover. In the back of the book, the "Anecdotes and Pleasantries" section doles out lyrical adages such as, "Brush your teeth in your youth or when you're old you'll brush your tooth."

"The almanacs can certainly get aspects of the climatological forecast correct. Anyone knows that the chance of it snowing and being cold in Minnesota in February is quite high," said Shepherd. "But I bet on the science advances of meteorology for precise forecasts and warnings in life-threatening situations."

The Almanac derives its weather forecasts from "a secret formula" its founder devised in 1792.

"Thomas believed that weather on Earth was influenced by sunspots, which are magnetic storms on the surface of the Sun," the book says. "Over the years, we have refined and enhanced that formula with state-of-the-art technology and modern scientific calculations."

The 2015 edition says that important factors in the coming winter weather predictions include "a continued warm phase in the Atlantic Multidecadal Oscillation (AMO), a near-neutral phase in the North Atlantic Oscillation (NAO) in most of the winter, and the long-term cool phase of the Pacific Decadal Oscillation (PDO) likely nearing its end. Oscillations are linked ocean-atmosphere patterns that influence the weather over periods of weeks to years."

It also highlights the El Niño Southern Oscillation (ENSO), but it blatantly contradicts the prevailing judgment among climate experts that we're in for a monster of an El Niño -- possibly the largest season on record -- that could drench California and other parts of the West Coast.

"If they are correct, then winter will likely be rainier than we are forecasting in California and the Southwest," the Almanac says. "Unfortunately, we believe that it is more likely that El Niño will be in a weak to neutral phase." It predicts "below-normal precipitation" in most of drought-stricken California.

"Every forecast I am seeing from NOAA and others suggest El Niño will be intensifying. For now, I will go with the scientists and agencies like NOAA and NASA," Shepherd said. "The place where I somewhat agree is that we do have to look at all of the players in the band, not just one trumpet player. Indeed, NAO, etc. are important. But, it is odd that they are saying something so different about El Niño than almost everyone else."

Stillman underscored that the Almanac's meteorologist, Michael Steinberg, made his predictions back in January -- and that he stands by them.

"We are still of the mind that it's not going to fully form into what I've heard called a 'Godzilla of El Niños,'" she told CBS News.

"On the other hand we are fully open to the possibility that it could and it might, and if it did we will concede to Mother Nature and step back and applaud and be grateful for the fact that California would get that kind of relief. If El Niño comes, that will be swell."

Jason Samenow, the weather editor at the Washington Post, wrote Monday, "The forecasters for the Old Farmer's Almanac appear to be thumbing their noses at the usual winter impacts of a strong El Niño event, which favor a mild winter in the northern U.S. and abundant rain in California."

Samenow's post included a number of callouts to jokes on social media likening the Almanac to a Magic 8 Ball or psychic hotline.

Stillman's response: "Folks have been saying that for 224 years!"

"I think it stems often from the fact that they don't understand what we do," she added, which is largely by design. "Let's face it: It's a little bit of faith and belief in a system and it doesn't have to be the system they subscribe to."

The Almanac claims a historical average accuracy rate of 80 percent. It says it beat that this past winter, coming out right 93.6 percent of the time.

Its biggest win of 2015? "We disagreed with nearly all the other forecasters by saying that the moderate to strong El Niño they predicted would not develop and that, accordingly, most of California and the Southwest would have below-normal precipitation, with their drought worsening."

But it came up short on Boston, admitting that one of its "greatest errors" was underestimating how hard the city was going to get pummeled with snow. It got over 108 inches, a record.

"The winter of 2015-16," the book predicts, "will be another snowy one in much of the northeast quarter of the country, with areas in the Pacific Northwest also relatively snowy."

It says the Northeast, Ohio Valley, northern Plains, and Pacific Northwest should brace for a slew of snow, though it won't be as bad in Boston as it was last year.

For hopefuls in Bean Town, that might be enough to hang your wool hat on.

But if the rest of the country doesn't buy in, Stillman gets it. "It's all really based on a whole different way of thinking. There are a lot of folks out there who don't believe or don't understand how this works, so see it as contrarian or just wacky."

The coolest planes ever to fly