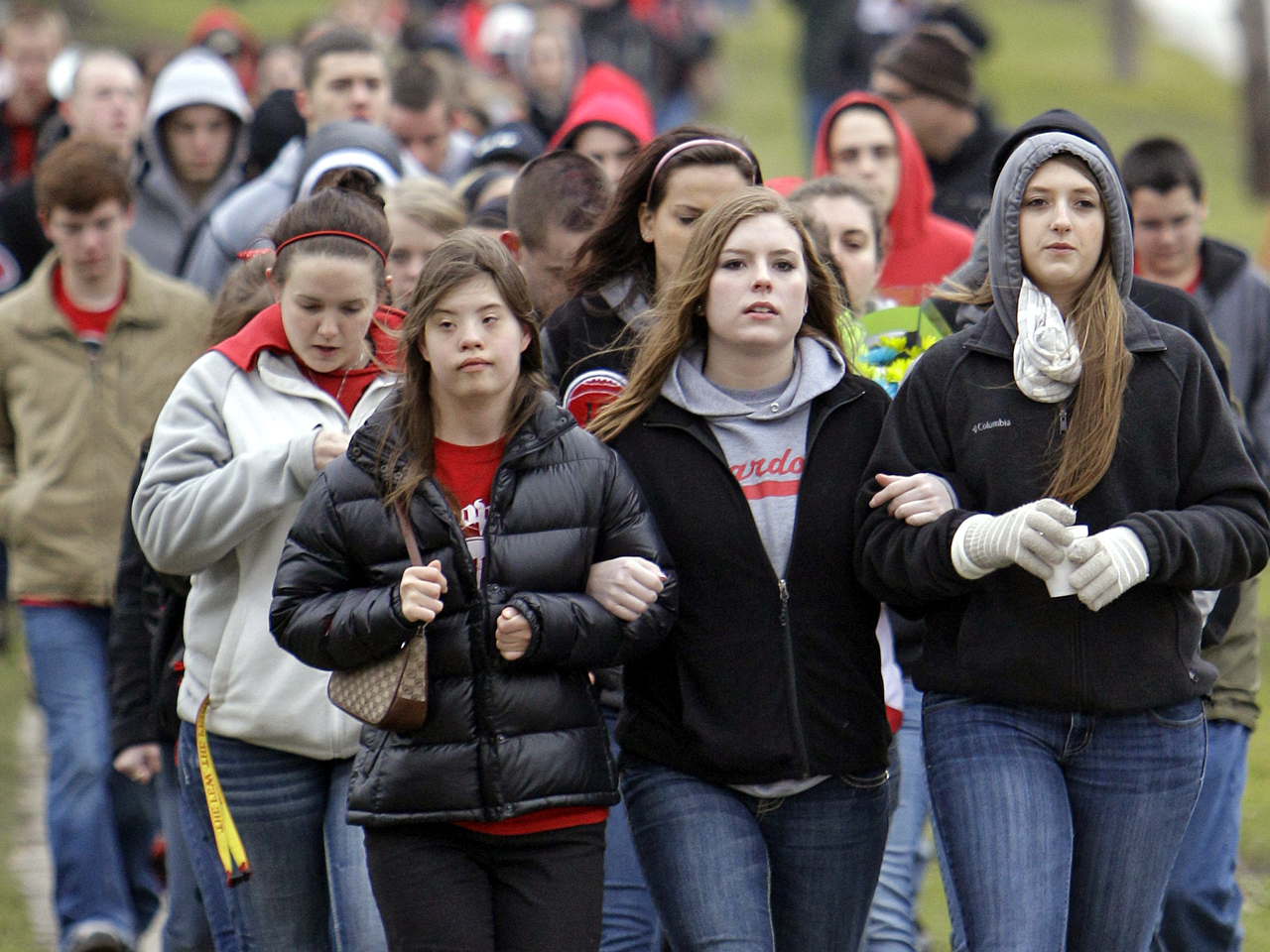 (CBS/AP) CHARDON, Ohio - The deadline to file charges in a fatal high school shooting loomed as students still reeling from the slaying of three teenagers marched by the hundreds to their reopened school Thursday.

The students, many with their parents and wearing the school colors of red and black, started the day gathered around a courthouse square gazebo, quietly singing the alma mater.

Students hugged the parents and one another they left the gazebo, which was decorated with a growing memorial of red roses and carnations, stuffed animals, burned-down candles and handwritten messages of support.

Six hand-drawn angels graced a plastic-covered piece of cardboard with the wish "May God Bless everybody in Chardon." Two bunches of black and white balloons tied to the gazebo railing included red heart-shaped balloons bearing the names of two victims, and a heart cut from red felt read "ONE HEARTBEAT" and urged people to pray for the town.

"I'm just scared for everybody and I don't know how everybody is going to act going back into school," said Theodore Rosch, 16, a freshman, as his father, Will Rosch, wrapped his left arm around his son's shoulders.

A judge said prosecutors had until Thursday to file charges against the shooting suspect, TJ Lane, a thin, quiet 17-year-old accused of opening fire on a group of students sitting at a cafeteria table at 1,100-student Chardon High School on Monday. Three students died, and two were seriously wounded.

A prosecutor has said Lane, who is in custody, will probably be charged with three counts of aggravated murder and other offenses. Prosecutors are expected to ask that he be tried as an adult.

Earlier this week, CBS News learned that Lane told police he stole the .22-caliber pistol used in the rampage from his uncle. But now a report has surfaced that he may have taken it from his grandfather's house, where the teenager lived.

In the case involving Breuning, Lane's uncle had come by the house where Lane was living with his grandparents on Dec. 9, 2009, after Lane said he didn't want to go to a volunteer job required for school, according to the sheriff's office report.

The uncle planned to remove Lane's brother, a drug addict, in hopes of preventing further problems, but the brother didn't want to go and punched the uncle after he tried to grab his coat, the report said.

Lane entered the juvenile court equivalent of a guilty plea to a reduced misdemeanor charge of disorderly conduct and was given a suspended sentence of up to 30 days in jail.

Judge Timothy Grendell wouldn't say if there are other files on Lane that might be covered by a law allowing certain records to be withheld.

Longtime neighbors and friends on Wednesday expressed disbelief at how Lane could be the suspect, describing a boy from a broken family who had struggled in school but appeared to improve once he began staying with his grandparents and attending an alternative school with several dozen students.

"He went from flunking out, from what I understand, to almost a straight-A student with honors, and he was going to graduate a year early," said Russ Miller, who has known Lane for more than a decade and lives near Jack Nolan, Lane's grandfather. Nolan has familial custody of the teenager.

Miller, a Vietnam veteran, said he had talked to Lane about joining the military, but the boy hadn't made plans.

"He was a typical 17-year-old," Miller said. "He didn't really know what he wanted to do in his life." He said Lane didn't smoke, drink or do drugs and is "kind of a health nut."

Another neighbor said Lane played outside often with his sister, building snow hills and skateboarding.

Steve Sawczak, a pastor who has worked with troubled children and lives next to the Nolans, said he never saw hints of trouble from Lane. He said the grandparents gave Lane a healthy place to live and have been left shocked and devastated.

Neighbors said Lane's father visited his son often, sometimes taking him and his sister camping or to the school to catch the bus.

Prosecutor David Joyce has described the younger Lane as "someone who's not well" and said the teen didn't know the victims but chose them randomly. Killed were Demetrius Hewlin, 16, Russell King Jr., 17, and Daniel Parmertor, 16.

Hewlin's parents told ABC News they have forgiven Lane for shooting their son, noting that Demetrius was often late for school, but not late enough on Monday.

Demetrius' mother Phyllis Ferguson said Wednesday she doesn't know what her son's last moments were like, but she can't worry about that.

"You have to accept things and move on," she said.

When asked what she would say to the suspected shooter, Ferguson said, "I would tell him I forgive him because, a lot of times, they don't know what they're doing. That's all I'd say." Hewlin's parents said they are donating his organs. Their son would have turned 17 next week.

An 18-year-old girl who was hurt in the shootings was released from the hospital Tuesday and was home with relatives, who declined to comment. The second injured teen remained in serious condition Wednesday at a suburban Cleveland hospital.

President Obama on Wednesday offered condolences to Chardon High School principal Andy Fetchik, telling him in a phone call he was heartbroken by the news and asking how the principal and school community were holding up, The (Cleveland) Plain Dealer reported.

Both sides in the legal case are under a gag order imposed by the judge at the prosecutor's request. Grendell earlier barred media outlets from taking photos of the suspect's face but reversed the decision Wednesday and said Lane, who appeared at his hearing wearing a bullet proof vest, may be photographed at a pending a hearing next Tuesday. Social media sites have been full of angry and hate-filled remarks directed at Lane.

The AP transmitted photos and video of Lane that were taken before Tuesday's order. The AP and at least one other media outlet, The Plain Dealer of Cleveland, challenged the judge's order Wednesday.