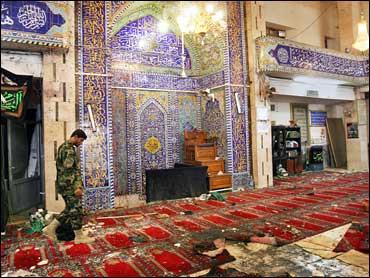 A shoe bomber blew himself up inside an important Shiite mosque during Friday prayers, killing at least 13 people and wounding 28, as violence persisted in the capital despite a massive security operation aimed at restoring order.

The imam of the Buratha mosque in northern Baghdad, a leading politician and deputy with the governing Shiite coalition who often spoke out against the late terrorist leader Abu Musab al-Zarqawi, blamed al Qaeda in Iraq for the attack.

Late Friday, Iraqi leaders condemned any attacks on places of worship and called on the security forces, already in a crackdown mode, to be more vigilant than they already are, reports CBS News correspondent Lee Cowan.

The security operation in Baghdad has imposed a driving ban during Friday prayers to prevent suicide car bomb attacks, as well as a curfew. About 75,000 troops are in the streets of the capital.

"They were targeting me for the second time and the prayers also," said the imam, Jalal Eddin al-Sagheer, in an interview with The Associated Press.

It was the second time the Buratha mosque has been hit in just over two months. It also was attacked during Friday prayers on April 7, when four suicide bombers, including a woman, killed 85 worshippers as they left the mosque after the main weekly service.

The U.S. military blamed that attack on al-Zarqawi, the al Qaeda in Iraq leader who was killed June 7 in a U.S. air strike. The group issued a statement Tuesday vowing to avenge al-Zarqawi's death and threatening horrific attacks "in the coming days."

Al-Sagheer, a member of Prime Minister Nouri al-Maliki's United Iraqi Alliance, said al-Qaeda in Iraq had threatened to kill him in an Internet posting earlier this week.

He said the group accused him of being behind death squads targeting Palestinians living in Baghdad. According to al-Sagheer, the April attack had been preceded by a similar posting.

"Al Qaeda is trying to restore some respect after the killing of al-Zarqawi by targeting a leading Shiite cleric, but they will fail," he said.

Al-Sagheer said the explosives were inside a worshipper's shoes, adding that the bomber blew himself up when confronted by the guards as they began searching those with shoes beside them in the mosque.