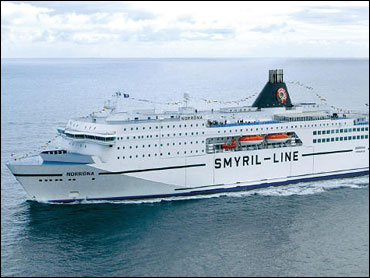 Hoping to collect decades of data, scientists are enlisting cargo and cruise ships to measure water temperatures, ocean currents and even the height of clouds as the vessels ply their regular routes.

That information is just starting to reveal the vast oceans' secrets, said Peter Ortner, chief scientist with the Atlantic Ocean Marine Laboratory of the National Oceanic and Atmospheric Administration.

"They're going to change our view over the next few years of the way the ocean actually looks," he said.

To begin to address questions of large ocean patterns, such as the changing path of the Gulf Stream, scientists need more than the few years of data most scientific missions can provide, he said.

The long-term data that commercial ships can furnish is what has been historically so difficult to obtain, said Thomas Rossby, professor at the University of Rhode Island's Graduate School of Oceanography.

"Presently, we basically depend on archived historical data to make inferences about change over a long time ... You're hostage to the limited amount of data available in the past," Rossby said.

The volunteer programs are also cheaper, considering the cost of renting a dedicated research vessel for a single day could exceed $15,000.

Scientists commented on the project at the biannual ocean sciences meeting of the American Geophysical Union.

Scientists use a "marine and atmospheric emitted radiance interferometer" to measure temperatures on the ocean's surface and a "ceilometer" to measure the altitude of clouds. The devices are attached to the decks and roofs of ships.

With instruments affixed this year to the Norrona, a ferry that makes a roundtrip every week stopping in Denmark, Scotland and Iceland, Rossby hopes to learn more about the cold waters emptying out of the Arctic seas into the northern Atlantic Ocean.

Scientists also have been using instruments attached to the cargo ship Oleander since 1992 to monitor the Gulf Stream as the vessel passes between Port Elizabeth, New Jersey, and Bermuda.

And another ship, Nuka Arctic, has been helping since 1999 to give scientists a look at the Gulf Stream along its path between Denmark and Greenland.

With such information regularly collected over a long period of time, researchers hope not just to observe a particular change but to gain an understanding of how the ocean behaves over time, Rossby said.

The ships function similar to satellites, which probe through the atmosphere, down to the surface of the ocean, he said.

Like satellites, the ships "are going back and forth, and with the instruments we put on the ship, they can probe the ocean underneath," Rossby said.

And on at least one cruise ship scientists also are set up to talk directly with the public about their work.

Working with the University of Miami's Rosenstiel School of Marine and Atmospheric Science, cruise ship operator Royal Caribbean International built Explorer of the Seas with oceanographic and atmospheric laboratories for scientists and a science learning center for passengers.

Launched in 2000, the ship makes weekly journeys from Miami to St. Maarten and Cozumel.

"You interact with hundreds of people and they learn about oceanographic and atmospheric science. And frankly, and hopefully, they become the constituents that we're going to need to be environmentally responsible," Ortner said.

He said scientists on board are encouraged to wear a uniform of a tan shirt and pants so that passengers can spot them and buttonhole them with questions.

About 60,000 people have attended the increasingly popular scientists' lectures on the ship, said Rod Zika, professor and chief scientist of the Explorer of the Seas Program at the University of Miami.

"And some people even stay on when they're in port. Rather than go on and buy the trinkets, they stay on to do this," Zika said.

Michael Sheehan, spokesman for Royal Caribbean, said the program started out as a way to give back to the environment but quickly grew to include participation by NOAA and NASA and a program for visiting researchers.

"It's blossomed into something I'm not sure any of us considered at the beginning," he said.

Rossby said he looks forward to the day when instruments will be designed specifically for use on volunteer ships.

Meanwhile, commercial ships have a far larger presence on the ocean than either research or military vessels, and scientists are working to develop partnerships with them to make their research more cost efficient, Rossby said.

The ocean is vastly under-sampled, and using these ships can help change that, he said.

"Every time you put an instrument in the water, without much exaggeration, it's incredible what you can learn because we're still only scratching the surface of the system," he said.