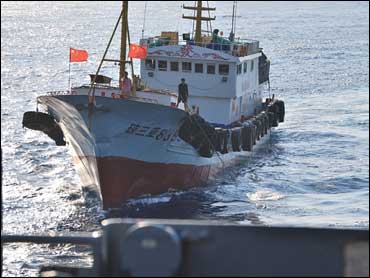 The top U.S. and Chinese diplomats have work to do to keep a confrontation between American and Chinese naval vessels from damaging a relationship that President Barack Obama deems crucial to confronting the world's toughest crises.

Even if diplomatic efforts by Secretary of State Hillary Rodham Clinton and Chinese Foreign Minister Yang Jiechi are successful in toning down the dispute - the two were scheduled to meet Wednesday in Washington - they may ease anger only temporarily over a larger military disagreement.

Beijing has long complained about U.S. surveillance operations around China's borders. Without better communications between the two militaries as they operate in the South China Sea, the possibility for future conflict will remain.

Clinton and Yang "can have a productive exchange to keep this bounded, but the real bureaucracies that need to be there aren't going to be at the meeting," said Jonathan Pollack, professor of Asian studies at the U.S. Naval War College.

He suggested that without stronger military-to-military links, the potential for "something ugly" happening "should not be minimized."

U.S. defense officials said Tuesday that the Navy ship was looking for threats such as submarines, presumably Chinese. The officials spoke on condition of anonymity because the ship's exact capabilities are sensitive. Other U.S. officials have said publicly that the United States will continue to patrol in the South China Sea despite Chinese objections.

On Wednesday, China's Foreign Ministry in Beijing reiterated that the U.S. claims are "gravely in contravention of the facts and unacceptable to China."

Also Tuesday, U.S. National Intelligence Director Dennis Blair told lawmakers that the incident was the most serious episode between the two nations since 2001, when China forced the landing of a U.S. spy plane and seized the crew. Blair said the confrontation indicated that China is willing to flex its military might.

The Clinton-Yang meeting Wednesday was meant originally to build on good will from Clinton's visit to China last month. Yang also was scheduled to meet with Treasury Secretary Timothy Geithner and with White House officials, the State Department said.

Clinton, during her China trip, impressed Beijing officials by listening to China's concerns, pledging not to let human rights differences interfere with attempts to cooperate on broader issues, and generally working to lay a foundation for a positive relationship between the two powers.

An indication of the sensitivity involved in the complex relationship arose Tuesday, the 50th anniversary of the 1959 Tibetan uprising that resulted in the flight into India by the Dalai Lama, living god to Tibet's Buddhists, and 80,000 followers.

Robert Wood, acting spokesman at the State Department, issued a statement Tuesday night noting the anniversary and treading softly on differences it shows between the United States and China.

"The United States respects the territorial integrity of the People's Republic of China and considers Tibet to be part of China," Wood's statement said. "At the same time, we are deeply concerned by the human rights situation in Tibetan areas."

The weekend naval incident comes as the Obama administration tries to get Chinese help on a host of foreign policy matters, including efforts to confront Iran and North Korea over their nuclear programs.

Sedney said after he returned to Washington that a changing Chinese military is increasingly interested in cooperating with the United States. He also noted U.S. worries about China's huge amounts of opaque defense spending, a weapons buildup across from Taiwan and arms sales to Iran.

Bonnie Glaser, an analyst with the Center for Strategic and International Studies think tank, said the immediate goal for Clinton and Yang is to underscore the importance of the relationship and ease tensions before Obama and Chinese President Hu Jintao meet in early April.

Sunday's incident, she said, is part of "an ongoing push and pull between the Chinese and the U.S." over American surveillance.

Both sides need to find a solution that allows them to "have rules of the road, safe means of operations that are agreed upon so that we don't end up with an accident that gets escalated," Glaser said. "These things can often be difficult to defuse."