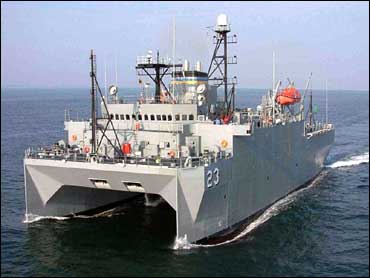 China has rejected an accusation by the United States that a U.S. Navy mapping ship was harassed by Chinese vessels in the South China Sea, saying the American ship was breaking international laws.

He said the ship "broke international and Chinese laws in the South China Sea without China's permission."

The U.S. Defense Department says Chinese ships surrounded and harassed the Navy vessel in international waters Sunday, at one point coming within 25 feet of the American boat and strewing debris in its path.

The Obama administration said the incident Sunday followed several days of "increasingly aggressive" acts by Chinese ships in the region.

U.S. officials said a protest was to be delivered to Beijing's military attaché at a Pentagon meeting Monday.

"The unprofessional maneuvers by Chinese vessels violated the requirement under international law to operate with due regard for the rights and safety of other lawful users of the ocean," said Marine Maj. Stewart Upton, a Pentagon spokesman.

A Chinese intelligence ship and four others surrounded the USNS Impeccable, an unarmed vessel with a civilian merchant marine crew, as the craft conducted ocean surveys in international waters in the South China Sea, the Defense Department said in a statement.

The other Chinese ships were fishing vessels and tried to snap the U.S. ship's towed sonar, among other things, reports CBS News correspondent David Martin.

The Impeccable sprayed one ship with water from fire hoses to force it away. Despite the force of the water, Chinese crew members stripped to their underwear and continued closing within 25 feet, the Defense department said.