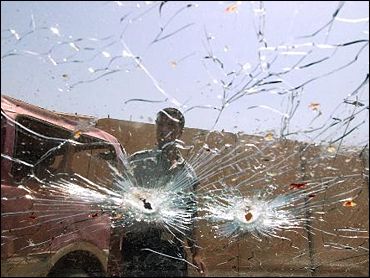 Clashes between coalition troops and Shiite fighters intensified on Friday as violence claimed the lives of civilians, insurgents and Iraqi policemen.

American soldiers fought Shiite militiamen in Najaf overnight, and six members of a family, including three children, were killed in the crossfire. At least one militiaman also was killed.

In the northern city of Mosul, a roadside bomb killed four Iraqi policemen on patrol.

U.S. troops and militiamen loyal to radical clerics Muqtada al-Sadr clashed near holy shrines in Karbala, while gunmen killed two journalists from Polish television who were driving from Baghdad to Najaf.

With hundreds of nearby U.S. troops on a mission to capture him, al-Sadr arrived from Najaf at the main mosque in Kufa surrounded by a large number of heavily armed black-garbed gunmen, including at least one carrying an anti-aircraft gun.