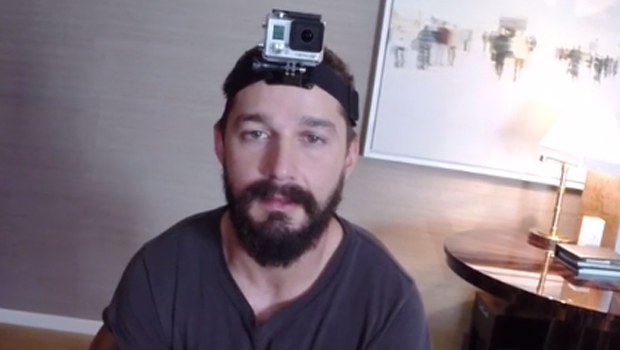 Shia LaBeouf says he was raped during his #IAMSORRY art installation performance in February. The 28-year-old actor described the alleged incident in an email to writer Aimee Cliff of Dazed and Confused magazine.

Cliff says LaBeouf reached out after seeing some of her articles on his performance art from earlier this year. For a couple of weeks, they emailed back and forth about his recent projects, including "Fury" and "Nymphomaniac."

At one point during their correspondence, LaBeouf writes about his #IAMSORRY art installation performance in which he sat alone in a room at a gallery in Beverly Hills, California, sporting a tuxedo and a bag over his head. He asked people to come in one by one to visit him -- and then he says this happened: "One woman who came with her boyfriend, who was outside the door when this happened, whipped my legs for ten minutes and then stripped my clothing and proceeded to rape me. There were hundreds of people in line when she walked out with disheveled hair and smudged lipstick. It was no good, not just for me but her man as well."

LaBeouf added that his girlfriend, Mia Goth, was nearby:

"On top of that my girl was in line to see me, because it was Valentine's Day and I was living in the gallery for the duration of the event--we were separated for five days, no communication," he wrote. "So it really hurt her as well, as I guess the news of it travelled through the line. When she came in she asked for an explanation, and I couldn't speak, so we both sat with this unexplained trauma silently. It was painful."

Following the email exchange with Cliff, LaBeouf suggested they meet.

Cliff writes, "We arrange to meet in London when LaBeouf is in town for the premiere of 'Fury.' Rather than a regular interview, LaBeouf suggests that we keep all of our words online, and meet in person without speaking. It's mid-October when we come face to face in his hotel room, both of us with GoPros strapped to our heads, for an hour."

See the result below and read more about the back story here. Cliff also posted their email exchanges online -- an interesting read for anyone wanting to know more about LaBeouf, his line of thinking and more.

INTERVIEW from Rönkkö / Turner on Vimeo.