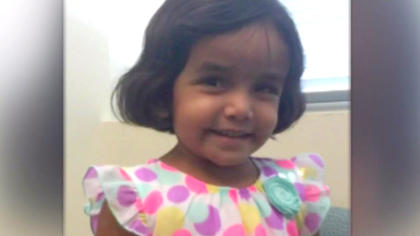 DALLAS -- The father of a 3-year-old girl whose body was found near their suburban Dallas home less than a year after she was adopted from an Indian orphanage has been indicted on a capital murder charge by a grand jury. Dallas County court records show 37-year-old Wesley Mathews also faces charges of abandoning a child and tampering with evidence.

He is already charged with felony injury to a child.

Police say Mathews, in one account, told investigators that Sherin Mathews choked on her milk.

Mathews is being held at the Dallas County jail on a $1 million bond. His wife, 35-year-old Sini Mathews, is being held on a charge of abandoning a child.

Police have said they believe Sini Mathews was sleeping when the girl went missing Oct. 7. The abandonment charge stems from police accusations that the woman left Sherin home alone for more than an hour while she, her husband and the couple's 4-year-old biological child went to dinner in Garland, reports CBS DFW.

An attorney for Wesley Mathews did not immediately return a call for comment.

Wesley Mathews has given several accounts of what happened to his daughter. In his initial story given to investigators after the child vanished, Mathews said that he sent the girl outside as punishment for not drinking her milk, and when he returned about 15 minutes later, the child was gone. He reported her missing about five hours later.

Sherin was adopted from India in 2016. Mathews told investigators the girl had developmental disabilities and was malnourished. He described a special diet regimen in which she had to eat whenever she was awake in order to gain weight.

Mathews also reportedly told investigators that he "knew coyotes had been seen in the alley where he left his daughter."

Later that month, Mathews gave investigators with the Richardson Police Department a disturbing new story, detailed in an arrest warrant issued at the time for felony injury to a child while he was out on bond on a child abandonment charge.

The warrant says Mathews told investigators after he was read his Miranda rights that he had been trying to get the child to drink her milk in the garage, but she wouldn't listen to him. Eventually, he said, the girl began to drink the milk. Mathews said he physically assisted the girl in drinking the milk, and that's when the child began to choke.

Mathews said he held his daughter as she died, reports CBS DFW.

"She was coughing and her breathing slowed," the warrant said. "Eventually, Wesley Mathews no longer felt a pulse on the child and believed she had died."

Mathews allegedly said he placed her body in the back of his car with a bag of garbage, drove to a shopping center where he disposed of the garbage, then to a culvert where he hid her body, reports CBS DFW. The little girl's body was found there Oct. 22 and her death was ruled a homicide.

Speaking at a press conference Friday, Dallas County District Attorney Faith Johnson said evidence from the autopsy led prosecutors to seek a capital murder charge, which carries a possible death sentence. She said she hasn't decided whether to seek the death penalty.

Johnson wouldn't speak to how the girl died, saying her office has "some information in terms of what happened" but is still investigating.

"We will be tenacious, we will be persistent, and we will prosecute this case to the fullest," she said.

Richardson Police Chief Jimmy Spivey said the case has been "very intensive" for his department.

"We're pleased we've reached this stage in the investigation…hopefully we've taken the next step to bringing justice for Sherin Mathews," Spivey said.