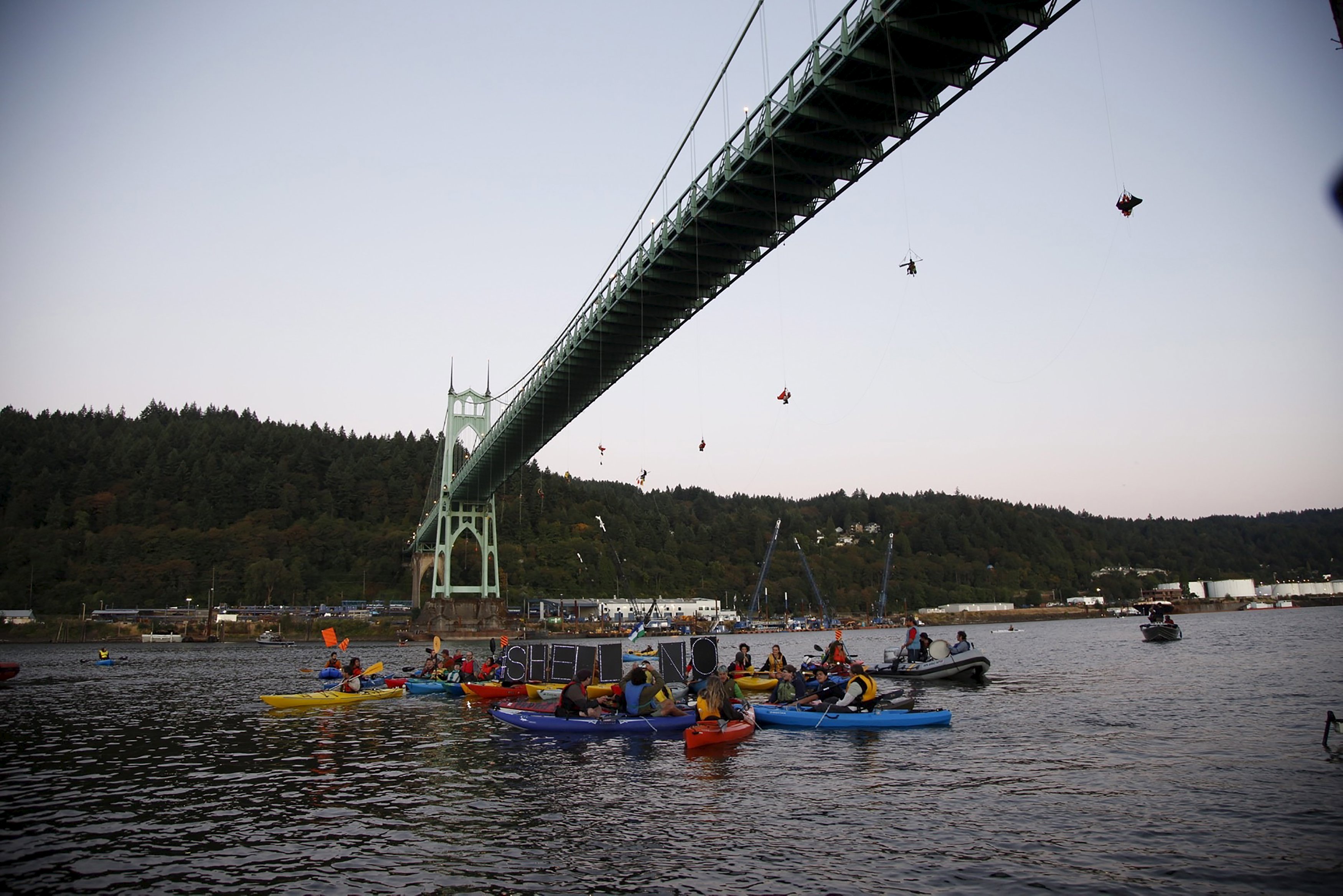 PORTLAND, Ore. -- Authorities used boats, personal watercraft, poles and their bare hands to remove protesters in kayaks and hanging from bridges who had tried to block a Royal Dutch Shell icebreaker bound for an Arctic drilling operation.

The Fennica left dry dock Thursday afternoon and made its way down the Willamette River toward the Pacific Ocean soon after authorities forced the demonstrators from the river and the St. Johns Bridge.

Several protesters in kayaks moved toward the center of the river as the ship began its trip, but authorities in boats and personal watercraft cleared a narrow pathway for the Fennica.

The fairly large crowd along the banks of the river applauded, seemingly in support of the rappelling protests and the kayaktivists, reports CBS Portland, Oregon affiliate KOIN-TV.

Authorities also jumped into the water to physically remove some protesters who left their kayaks.

Sgt. Pete Simpson, a Portland police spokesman, said "a number of people" were detained and it was still being determined whether any would face charges.

Simpson earlier said safety was the main priority as authorities forced protesters from the area.

"This is, obviously, a very unique situation," he said.

The Fennica arrived in Portland for repairs last week. It attempted to leave earlier Thursday but turned around when activists dangling from the bridge refused to let it pass.

The icebreaker is a key part of Shell's exploration and spill-response plan off Alaska's northwest coast. It protects Shell's fleet from ice and carries equipment that can stop gushing oil.

Authorities moved in hours after a federal judge in Alaska ordered Greenpeace USA to pay a fine of $2,500 for every hour that protesters dangled from the bridge to block the ship.

In May, U.S. District Judge Sharon Gleason granted Shell's request that activists protesting its Arctic drilling plans be ordered to stay away from company vessels and beyond buffer zones.

At the court hearing Thursday in Anchorage, Gleason said the hourly fine against Greenpeace would increase over the next few days unless the blockade was lifted. It would have jumped to $5,000 an hour Friday, $7,500 an hour Saturday, and $10,000 an hour Sunday.

The Fennica was damaged earlier this month in the Aleutian Islands when it struck an underwater obstruction, tearing a gash in its hull.

Environmentalists had hoped to delay the ship long enough for winter weather to prevent Shell from drilling until 2016. By that time, they hoped the Obama administration would have a change of heart on the issue.

Protesters began their blockade Wednesday. Several environmental groups joined Greenpeace's effort. On Thursday, activists in about 50 kayaks milled beneath the bridge as other protesters dangled from ropes above.

One of the kayak protesters, Leah Rothlein, borrowed her mother's kayak and headed onto the river.

"It's pretty cool," the 26-year-old said after coming ashore. "I was in the water for four hours."

In a statement Thursday night Greenpeace said 26 activists who had been blockading the St. John's Bridge had all come down from the structure.

"The last two days have been a very emotional experience for all of us at Greenpeace, as well as all those who supported this action around the country and the world," Greenpeace USA Executive Director Annie Leonard said.

Shell said in a statement Thursday, "We have consistently stated that we respect the right of individuals to protest our Arctic operations so long as they do so safely and within the boundaries of the law. The staging of protesters in Portland was not safe nor was it lawful. Furthermore, Greenpeace demonstrated a complete lack of regard for the authority of a U.S. Federal Court. We are pleased with today's court ruling that holds Greenpeace in contempt and prescribes fines for further non-compliance."