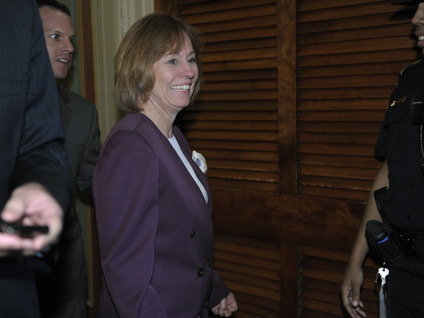 Democrats and liberal bloggers continue to search for surprising facts about Tea Party-backed Republican Senate candidate Sharron Angle, but the Associated Press has uncovered one fact the left may not have anticipated: Angle was once a registered Democrat and worked to elect a Democratic politician in Nevada.

Rather than giving any indication of her ideological beliefs, however, that fact may simply show her history of independence from the Republican party. In the 1990's, she belonged to a conservative third party.

While Angle alluded to conservative hero President Ronald Reagan the night she won the primary, she in fact was a registered Democrat during part of his presidency. Records show, the AP reports, that Angle was a registered Republican until 1984, when she switched to the Democratic party. She stayed a Democrat at least through March, 1988.

Campaign spokesman Jerry Stacy told the AP Angle switched parties to work for a conservative Democrat running for state Senate, but she voted for Reagan in both 1980 and 1984.

Angle rejoined the Republicans in 1997.

The candidate in Washington this week to meet with Republican Party officials and conservative activists, but she has taken some heat for avoiding reporters.

"I think she needs to get staffed up and prepared," he said. "The kind of scrutiny candidates undergo in a general-election race like this is far different than virtually anybody's been through before, and I just think it's a matter of due diligence and being prepared."