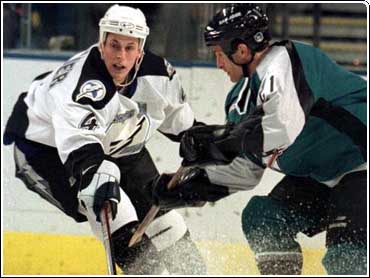 The San Jose Sharks broke out of an offensive slump in a big way.

Owen Nolan had two goals and three assists, and Steve Shields stopped 23 shots as the Sharks ended a six-game winless streak with an 8-0 victory over Tampa Bay on Tuesday night.

"That's a team over there that's struggling and we took advantage of it," Nolan said. "We haven't seen bounces like that in a long time. We've been working hard enough, but haven't gotten them."

Nolan, who has 34 goals and 31 assists, is second in the NHL in scoring with 65 points 15 behind Pittsburgh's Jaromir Jagr.

"Everybody was ready," Nolan said. "I think our effort started with everybody. The All-Star break did our team some good. The guys were fresh and had a lot jump."

Shields made two strong saves on Mike Sillinger during the second period in recording his second shutout this season and sixth of his career.

"It's nice to get some goals and have a game like that where you know going into the third period you're going to win the game as long as you keep doing what you're doing," Shields said.

Jeff Friesen had two goals and two assists for San Jose, 2-6-2 in its last 10 games.

"It felt good for us to breakout," Friesen said. "It's just one game against a team we should beat. As for scoring a lot of goals, it's just two points, but it's good to have confidence."

Ron Sutter, Todd Harvey, Ronnie Stern and Patrick Marleau also scored for San Jose, which connected on three of its seven power-play opportunities after coming in 1-for-21 with the man advantage.

Tampa Bay backup goalie Kevin Hodson, filling in for the flu-stricken Dan Cloutier, allowed five goals on the first 15 shots he faced. The Lightning have lost 10 of 11 and are 2-20-2 in their last 24 games.

"There are some demons we have to exorcize, no question," Tampa Bay coach Steve Ludzik said. "Anything I have to say about my players, to my players, I'll say to them."

The Sharks, who had scored just 11 times in the past six games, took a 2-0 first-period lead on goals by Nolan and Sutter.

Friesen, Nolan and Harvey had second-period goals, putting the Sharks up 5-0. Friesen's power-play goal was his first goal in ten games.

Friesen, Stern who had gone 24 games without a goal and Marleau added third-period goals.

Ludzik juggled his lines, but the Lightning could muster just one shot during the opening 15 minutes. Tampa Bay finished the first period with three shots and had nine through 40 minutes.

Lightning center Robert Petrovicky left the game in the second period with a neck strain after a hard hit by Stern. Petrovicky is expected to be sidelined at least three to five days.