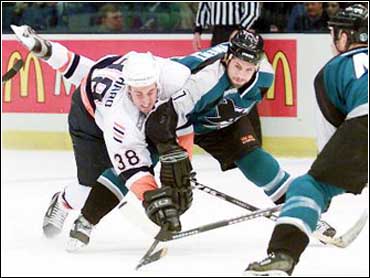 The San Jose Sharks won again on Long Island and not too many were around to see it.

Mike Rathje and Tony Granato also tallied for San Jose, which moved into a tie with Edmonton for sixth place in the Western Conference.

The 6,690 fans in attendance were the only people to watch the contest, since neither team televised the game. Even Sharks captain Owen Nolan found the game less than exciting.

"It's boring as hell in here," Nolan said.

Islanders coach Butch Goring, who never uses the sparse home crowds as an excuse made an exception.

"They were kind of quiet tonight," Goring said. "We could have used some help."

The Islanders, who won their previous three games, came out flat. Only the play of Roberto Luongo, who made 35 saves, kept New York in the game. He gave up a goal to Rathje with 1:35 left in the opening period on a slap shot from the right point.

San Jose put the game away with a pair of goals 52 seconds apart early in the second. Stuart scored at 1:49 on a snap shot off a pass from Patrick Marleau and then Granato beat Luongo wit a wrist shot at 2:41.

"We didn't seem to have any real jump tonight," Goring said. "Once they got the lead, they kind of smothered us pretty good."

Mariusz Czerkawski, the Islanders' leading goal and point scorer, kept his point-scoring streak alive with a power-play goal. Czerkawski, with seven goals and 11 assists, has points in 11 straight games.

The Islanders had a few chances early in the final period, but either Shields was there to stop them or the shots went wide.

Stuart finished off the scoring at 9:54 when his slap shot hit Luongo and dribbled in.

"It hit him and found its way up and over him," Stuart said. "It barely crossed the line. I think it was going one mile an hour."

Which was about as fast as the Islanders skated.

"We just never played very well tonight," Islanders defenseman Jamie Heward said. "We went out in the third period and did as much as we could, but we didn't get any breaks."

Czerkawski said something can be taken from each loss, and Tuesday's lesson was quite evident.

"It's something to learn from and try to forget," he said.

The Islanders welcomed back two defensemen, as Zdeno Chara and team captain Kenny Jonsson both played. Jonsson missed seven games with a concussion, while Chara was out of 16 contests with an injured shoulder.

Chara, one of the league leaders in hits until his injury, registered 10 hits in the first two periods.