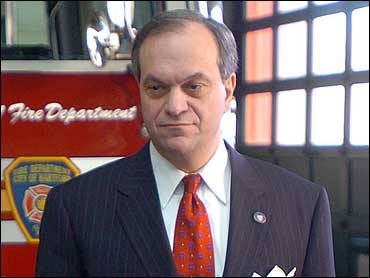 It happened at dusk on Saturday, in an area of beach that is not patrolled by lifeguards. David Peltier, 10, was swimming about 50 yards offshore, where the water is four feet deep, when a shark tore into his leg.

His father, Richard Peltier, tried to save him, hitting the shark in the head and carrying his son to shore as David's two brothers cried hysterically nearby.

One witness, Kayla Willard, ran to her parents in a nearby beach house for help. She tells CBS News Correspondent Tracy Smith, "I was like, 'Call the police! A little boy's been bitten!' And they were like, 'Don't scare us!' And then I started crying."

Her father, Jimmy Willard, ran to the scene: "You could tell he was in some pain. You could tell he lost a lot of blood. His lips were starting to turn purple. It was not a really pretty sight."

Emergency workers rushed the boy to a nearby hospital, where he died early Sunday morning.

Officials closed the beach for a short time. But, after a thorough check, using helicopters and boats, they opened it again at sunrise on Sunday.

"Because of the fact that we had no history of anything like this ever happening in memory, we decided it was fine to reopen the beach," said Bruce Edwards, who is chief of emergency medical services at Virginia Beach.

But that doesn't mean everyone is going back into the water, including beachgoer Preston Burns, who says, "I'm not scared of a shark knocking me off my kayak, but I'm not gonna swim around down there."

Despite the fact that this sounds like a story we've heard over and over again, officials say this is highly unusual: there hasn't been a shark attack in 30 years in Virginia Beach, and this tragedy took almost everyone by surprise.

David lost large amounts of blood from a severed artery in his left leg and died at 3:45 a.m. EDT, said George Stinnett, a spokesman for Children's Hospital of The King's Daughterin Norfolk.

"I speak for the entire city of Virginia Beach when I say how terribly saddened I am by this horrible accident," Virginia Beach Mayor Meyera E. Oberndorf said.

Scientists with the city's Virginia Marine Science Museum flew over the beaches in a police helicopter early Sunday and didn't spot any sharks. The museum's curator, Maylon White, said authorities did not know what kind of shark attacked the boy, although it likely was a large sandbar shark, which typically are 4 to 6 feet long.

Those sharks are not usually aggressive, White said.

"In many cases like this, the shark is feeding and it's after fish and it mistakes the person for the fish," he said.

In July, a shark bit off the arm of 8-year-old Jessie Arbogast in Florida's Gulf Coast. The boy's father wrestled the shark ashore and pulled the arm from its gullet. It was later reattached and Jessie remains in a light coma.

There have been 49 shark attacks worldwide this year, with one fatal in Brazil, said George Burgess of the International Shark Attack File in Gainesville. Twenty-eight have been in Florida waters.

Last year, there were 84 shark attacks worldwide, 53 in the United States, he said.