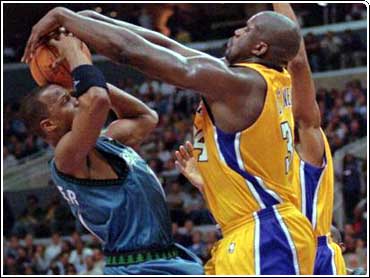 It happened suddenly, without warning a dominating six minutes that would have made Michael Jordan proud.

Shaquille O'Neal scored 18 of his 37 points in the first half of the second quarter Wednesday night, leading the Los Angeles Lakers to a 114-81 victory over the Minnesota Timberwolves.

O'Neal made seven of eight field goal attempts and four of five foul shots as the Lakers outscored the Timberwolves 20-7 to begin the second period for a 44-25 lead with 6:03 left before halftime.

O'Neal scored the final 18 points of the spurt, giving him 25 at that juncture.

"My guys were looking for me, I was hitting the (free) throws," O'Neal said. "Everything was going pretty well. If they had looked for me a little more in the second half, I would have had 60."

"We're getting back on track. Simple math for us get it into me, watch me work, if they double, I kick it out."

O'Neal, who made 11 of 16 shots and a surprising 15 of 20 free throws, also finished with 16 rebounds, three assists and four blocked shots before leaving the game with 5:19 remaining.

"I'm changing my name to The Big Havlicek because of my free-throw ability," O'Neal said with a smile, referring to former Boston Celtics star John Havlicek.

"When Shaq is playing at the level he was playing at tonight, he dominates the game," said Lakers coach Phil Jackson, who watched Jordan have plenty of dominating nights during the 1990s, when the Chicago Bulls won six NBA titles.

"We had no answers early on for Shaq," said Timberwolves coach Flip Saunders, whose team lost for just the third time in 12 games. "He just totally dominated us. We just never got it going, and we were definitely outmanned at the center spot."

"Their defense was great. We didn't react to i. They really pressured us."

The Lakers extended a 13-point halftime lead to 78-53 late in the third quarter, and the Timberwolves wound up suffering their most one-sided loss of the season.

Kobe Bryant, who sat out the fourth quarter, added 24 points for the Lakers, who won their third straight but are just 6-6 since their 16-game winning streak.

"We're trying to get it back together," said Brian Shaw, who came off the bench to get eight points, seven assists and five rebounds in 21 minutes for the Lakers. "We went through a 2 1/2-week stretch where we couldn't do anything right."

They did a lot right against the Timberwolves, making 48 percent of their shots while holding Minnesota to 34 percent, and winning the rebounding battle 54-39.

Kevin Garnett had 29 points and six rebounds and Tom Hammonds added a season-high 12 points for the Timberwolves.

"The only one who had it going for them was The Big Ticket," O'Neal said, referring to Garnett.

"Shaq's the man, doing his thing," Garnett said. "Shaq's probably the best player in the NBA, you've got to recognize that. There ain't nothing you can do if Shaq has 40 or 50. You've got to compare him to Wilt (Chamberlain) and (Kareem) Abdul-Jabbar."

"If he makes free throws, he's hands-down the best player in the NBA, if he isn't already."

The Lakers went ahead for good by outscoring Minnesota 11-2 for a 19-10 lead.

The Timberwolves made just 8 of 23 shots in the first period, which ended with Los Angeles leading 24-18, and missed their first six of the second while the Lakers went on a 13-1 run.

Minnesota scored the final five points of the first half to cut the Lakers' lead to 54-41. O'Neal wound up with 20 points in the second period the most by a Los Angeles player in a quarter this season.