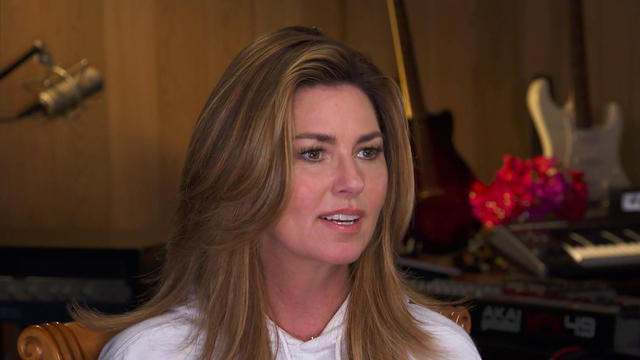 A country mile -- and more -- separates singer Shania Twain from the health crisis that threatened her career a few years ago.
She talks about the road back this morning with Lee Cowan:

"I like being close to the fans, physically. I like touching them, I just like that. I'm just one of them, and then I forget about who I am."

Those fans have waited a long time for Shania Twain to put out some new music. But a series of personal setbacks left the country music megastar feeling less like songwriting, and more like hiding away.

Legendary rock producer Mutt Lange, known for his work with Def Leppard and AC/DC, had been her partner both in music and in marriage.  Together they created some of the biggest hits of the '90s -- many of them empowering anthems, such as "Man! I Feel Like a Woman."

Shania Twain was the Queen of Country Pop, blending her lyrics with Lange's Southern rock roots to earn her five Grammys and unrivaled popularity. To this day, she remains the best-selling female country music singer ever.

But their hit-making collaboration ended -- and so did their marriage, after Twain says Lange had an affair with one of her best friends.

"I was now, for the first time in many years, standing on my own as a creative, artistic, recording artist," Twain said.

"Was there a part of you that wondered if you could do it?" Cowan asked.

"There was self-doubt, for sure, but I was going to overcome that. That was my determination. I'm like, I am not going to let that stand in my way. I just have to try this."

The result? "Now," Twain's first studio album in 15 years. The first single is aptly called "Life's About to Get Good."

To watch Shania Twain perform "Life's About to Get Good," from her new album "Now," click on the video player below.

"As the song writing evolved, I just sort of wrote myself out of my misery," she said.

She spent two years working on the album at her island getaway in the Bahamas. She wrote mostly from her second-floor window in her "other studio."

Yes, her bathroom. It's not about the acoustics in here, or the view; it's about the solitude.

Cowan asked, "You need that sort of isolation so that you can sing it out loud and have nobody judge or hear?"

It's a lifestyle that doesn't just look exotic -- it is, and she makes no apologies.

Twain grew up Eileen Edwards in Ontario, Canada. Her family had little money -- she went to school hungry most days -- and she says her mother, Sharon, suffered frequent abuse at the hands of her stepfather.

"I remember so often the police coming in and, you know, banging in the door and the radios radios going and the guns, and you're just a child," she said. "It's just like a war zone."

"But as all of that was going on, it didn't sound like you really told anybody about it. You just kept it all inside?"

"You're afraid to tell anybody, because you think you're going to get taken away."

As therapy, she would grab her guitar and head out into the Canadian woods. By the time she was eight, her mother had her singing in dive bars.

"The performance scared the heck out of me," Twain said.

"I didn't like being the center of attention, period. First of all, I was an ugly kid, okay? So I was very insecure. I really was, oh my gosh!"

"My teeth were all spaced out, and my hair was frizzy …"

"So, did you feel as if your mom was pushing you on stage?"

But when Twain was just 22, her mother and her stepfather were both killed in a car accident -- a blow that almost stopped her from pursuing music altogether.

"It was very shortly after my parents died, a friend of my parents, she said, 'You can't quit music. You've got to do something about this.'"

Eventually she moved to Nashville, but she wasn't like most country artists at the time. She had a different sound, and a different look.

"I was told I was out on a limb!" Twain laughed. "'Belly button' and all this stuff."

"Your midriff was the topic of a lot of conversation."

"I had no idea it was going to be such a problem!"

Her cocktail of sex and songwriting worked. Her career skyrocketed, but she wasn't feeling it. "I was confused a lot of the time by, you know, Why am I so unhappy? Why am I so miserable?" she said. "I have everything that anybody could ever want. I should be just jumping for joy at all these things."

Instead of enjoying the success, she worked harder … and then came a wake-up call: She noticed her voice wasn't sounding the same. "I couldn't get any volume, and when I did it was just this really witchy sort of crying sound. It was awful."

It's a condition called dysphonia -- a side-effect, she thinks, of Lyme disease. It almost ended her career.

"I went through a phase of letting go and grieving over that loss, that I would never be a singer again," she said.

Years of vocal therapy brought her voice back. It's a little lower than it used to be, she says, but good enough that she mounted a successful two-year run in Las Vegas.

And her voice wasn't all she found…

She found love again, too, but with a tantalizingly complicated twist. In 2011 she married Fred Thiebaud, the former husband of the woman she claims had an affair with her first husband.

"I didn't feel like jumping back into marriage myself," Thiebaud told Cowan.

"I was a little careful, too," Thiebaud said. "I'm like, Okay, where is this going?"

Cowan asked, "Was there a moment you remember that it switched from being a friend to something more?"

After a patch of rough sailing, at 52 Shania Twain seems to have finally found some calmer seas -- a chance to find her course again, with music as her compass.