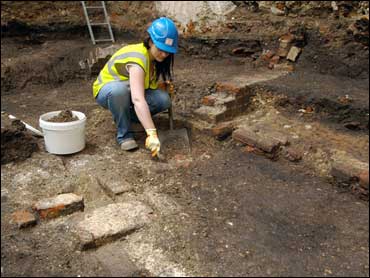 The theater where "The Merchant of Venice" and "Romeo and Juliet" likely debuted and where William Shakespeare himself may have trodden the boards has likely been discovered in east London, archaeologists at the Museum of London said.

The possible foundations of what is known as simply, The Theatre, were unearthed by builders excavating the site - a vacant garage - for another structure. Museum archaeologists were called to the location to make sure nothing was destroyed, and had a eureka moment.

"We were there, scratching our heads, looking into the trenches, thinking, 'this could be it,"' Jo Lyon, a senior museum archaeologist, said Wednesday. "So we did some more research, and then we found the angled walls. And we all went, 'Oh my gosh, this should be it.' "

Other theaters of similar vintage also have angled walls, so the discovery was significant. Archaeologists also had known for a long time there was a high probability for The Theatre to be on this particular site. But there are no maps that show its location, no images to show what it might have looked like, and only a vague description of it.

"It's in the right place, it's at the right angle to be a polygonal shape," Lyon said. "It's a pretty high possibility."

The possible discovery of The Theatre, built in 1576 and where Shakespeare's troupe performed in the 1590s, could complete the set of open-air theaters where the Bard's plays were staged. The Rose theater's location was discovered in 1989 in Bankside, just south of the River Thames in central London, and the Globe theater is nearby. A replica of the Globe was built on a site close to the original and opened in 1997.

Shakespeare's company, the Lord Chamberlain's Men, only moved into The Theatre in the 1590s. Until then, they had been performing at the Rose, but a shake up in the London theater scene necessitated the move, said Martin Wiggins, a fellow at the Shakespeare Institute at the University of Birmingham.

And in 1597, a dispute with the landlord forced the company to move again, Wiggins said. They didn't own the ground The Theatre was built on, but the company did own the material it was built with, so they simply dismantled the entire theater and moved it south across the River Thames, where it was rebuilt and renamed the Globe.

But The Theatre's foundations remained in east London, and that's what archaeologists believe they have found.

Wiggins said an understanding of what the theater looked like could help Shakespearean scholars understand more about this period in the playwright's history.

"The size of the theater will have an impact on the way the play is written," he said.

Other works that would have been performed during the period Shakespeare's company were at The Theatre would have included "Henry IV," "Richard II," "King John," and "the Merry Wives of Windsor," Wiggins said.

Lyon said it's unlikely The Theatre's complete foundations will ever be fully excavated, but her team intends to examine them further. Fittingly, a new theater is being built on the site, ensuring the foundations below are protected.