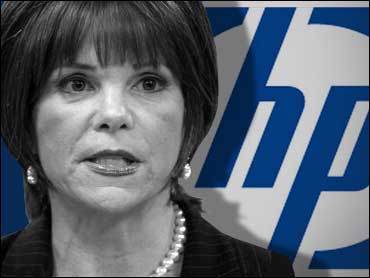 Hewlett-Packard Chairwoman Patricia Dunn will step down in January and be succeeded by CEO Mark Hurd amid a widening scandal involving the computer and printer company's possibly illegal probe into media leaks.

Director George Keyworth II, who acknowledged sharing company information with reporters, resigned from HP's board later Tuesday morning. The board had asked Keyworth to resign in May, but he refused.

Hurd will retain his existing positions as chief executive and president and Dunn will remain as a director after she relinquishes the chair on Jan. 18.

"I am taking action to ensure that inappropriate investigative techniques will not be employed again. They have no place in HP," Hurd said in a statement Tuesday.

Dunn apologized for the techniques used in the company's probe, which included "pretexting" in which private investigators impersonated board members and journalists to acquire their phone records.

"Unfortunately, the investigation, which was conducted with third parties, included certain inappropriate techniques. These went beyond what we understood them to be, and I apologize that they were employed," Dunn said in a statement.

The pressure on Dunn to step down began rising sharply on Monday when Congress and federal investigators entered the fray surrounding HP's investigation. The FBI, the U.S. Attorney for Northern California and the House Energy and Commerce Committee all joined the probe of the scandal swirling around HP's Board of Directors.

Dunn was angry about the media leaks of confidential board discussions and commissioned an unnamed outside firm to identify their source. They used Social Security numbers and other personal information to get phone companies to turn over detailed logs of home phone calls of reporters and company directors.

Although frequently used by private investigators, pretexting tests the bounds of state and federal law.

At a board meeting in May, Dunn identified Keyworth as the source of a news article that appeared on CNET Networks Inc.'s News.com in January. The board asked Keyworth, 66, to resign, but he refused. HP then barred him from seeking re-election.

"The invasion of my privacy and that of others was ill-conceived and inconsistent with HP's values," Keyworth said.

His ouster riled another board member, longtime Silicon Valley venture capitalist Tom Perkins, 74, who resigned and stormed out of the May 18 meeting.

Perkins' attorney later discovered that private investigators working for HP had obtained the last four digits of his client's social security number. They used that information to open an online account with AT&T, then called the telephone company and impersonated Perkins, asking for a record of phone calls to and from his house.

HP's investigators also obtained the phone records of several journalists, including those who work at The Wall Street Journal, BusinessWeek, The New York Times and News.com.

Keyworth, who has acknowledged talking to the media, was the former science adviser to President Reagan and director of the Physics Division at Los Alamos National Laboratory. He was not mentioned in the company's statement Tuesday.

On Tuesday, Dunn defended the need for the investigation.

"These leaks had the potential to affect not only the stock price of HP but also that of other publicly traded companies," she said.

HP's board met Monday night to discuss whether Dunn should remain chairwoman of the Silicon Valley giant.

Richard Hackborn, who has served on the board since 1992, will become lead independent director in January.

"I think the fact that they made the statement that she's going to leave solves most of the problem," said Roger Kay, who follows HP as president of Endpoint Technologies Associates, a market research firm. "I don't think it's that material precisely when she leaves."

Dunn's entanglement in the pretexting scandal marks a rare stumble for one of the most powerful women in corporate America.

The child of a vaudeville actor and a showgirl in Las Vegas, Dunn, 52, worked as a freelance journalist after college before taking a temporary secretarial job at Wells Fargo & Co.

She was CEO of Barclays Global Investors before she resigned from that post in 2002 to battle breast cancer and melanoma. Dunn joined HP's board in 1998 and became chairwoman in 2005, taking an active role in running the 11th largest company on the Fortune 500.

Hurd wasn't well known on Wall Street or in the financial media before taking the reins of HP. But he enjoyed a solid reputation among business experts as a no-nonsense cost cutter familiar with nearly every facet of management. HP shares surged 10 percent the day his appointment was announced.

He was previously chief executive at Dayton, Ohio-based NCR Corp., a computer services company best known for its ATM machines.

At HP he orchestrated a cost-cutting campaign that, when it winds down later this quarter, will have resulted in as many as 15,000 layoffs. But morale had been noticeably higher under Hurd than Fiorina — until the pretexting scandal.

Frank Gillett, vice president and principal analyst at Forrester Research, said technology buyers do not seem to be worried that the problems on HP's board will affect the day-to-day operations of the company.

"I'm not hearing anything or seeing anything that makes me concerned about the success of the products," Gillett said.

But if Hurd was involved in the "pretexting," HP could have a bigger problem.

"If Hurd were involved, it would make a giant mess catastrophic," Charles Elson, chairman of the Center for Corporate Governance at the University of Delaware, told the Los Angeles Times.