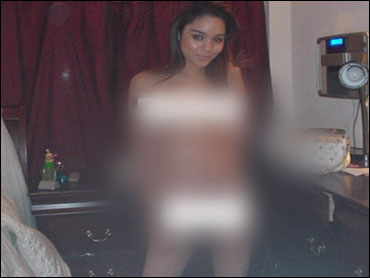 While it may be shocking, the practice of "sexting" - sending nude pictures via text message - is not unusual, especially for high schoolers around the country.

This week, three teenage girls who allegedly sent nude or semi-nude cell phone pictures of themselves, and three male classmates in a western Pennsylvania high school who received them, are charged with child pornography.

In October a Texas eighth-grader spent the night in a juvenile detention center after his football coach found a nude picture on his cell phone that a fellow student sent him.

Roughly 20 percent of teens admit to participating in "sexting," according to a nationwide survey (pdf) by the National Campaign to Support Teen and Unplanned Pregnancy.

"This is a serious felony. They could be facing many years in prison," CBS News legal analyst Lisa Bloom said of the six teens in Pennsylvania.

But, Bloom added, "What are we going to do, lock up 20 percent of America's teens?"

Police in Greensburg, about 30 miles east of Pittsburgh, say the girls are 14 or 15 and the boys charged with receiving the photos are 16 or 17. None are being identified because most criminal cases in Pennsylvania juvenile courts are not public.

Police say they first learned about the pictures in October. They say a student had a phone turned on in class, a violation of school policy, which prompted an administrator to confiscate the phone and subsequently find the pictures, reports CBS station KDKA-TV.