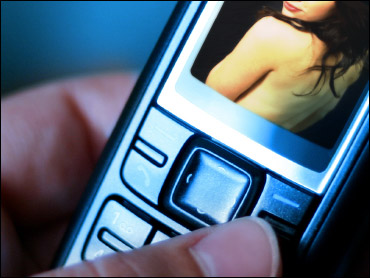 "Sexting" is the practice of taking a sexually revealing picture of yourself, typically from a cell phone, and sending it to someone. Legal consequences aside, it's a dumb thing to do, especially for younger age groups in which it has become something of a fad.

Even if you are comfortable with the person receiving the image, you never know for sure where else it might land. Digital images are easy to copy and forward and, even if you trust your friend's discretion, it can be accidentally forwarded or seen by others with access to your friend's phone or computer. It's not uncommon for such images to find their way to other people's cell phones and even Web pages, where they can be seen by anyone, copied, searched for and redistributed, perhaps forever.

For minors, there's another risk - serious legal consequences. Creating, transmitting and even possessing a nude, semi-nude or sexually explicit image of a minor can be considered child pornography. It can be prosecuted as a state or federal felony and can even lead to having to register as a sex offender.

And, as reported by CBS News, a Texas eighth-grader spent a night in jail in October after a coach found a nude picture on his cell phone, sent by another student.

It's hard to know how prevalent the practice is. But if you believe the results of an online survey commissioned by the National Campaign to Prevent Teen and Unplanned Pregnancy, about 22 percent of teenage girls and 18 percent of boys admit to having "electronically sent, or posted online, nude or semi-nude pictures or video of themselves." I'm not completely confident about the results of this study, which was carried out by a market research firm and not subject to academic peer review. But I think it's fair to assume that a significant number of kids are doing this.

Perhaps more interesting than the survey's overall number, is the breakdown of why teens take and send these pictures. Of those who reportedly sent such pictures, 71 percent of girls and 67 percent of boys said they sent or posted content to a boyfriend or girlfriend, while 21 percent of the girls and 39 percent of the boys say they sent it to someone they wanted to date.

While sexting is troubling, I think it's important for us all to take a deep breath and refrain from passing new laws or using child pornography laws that were designed to protect children from exploitation by adults.

The best thing for a parent to do is to have a non-confrontational conversation - perhaps over dinner - to ask your kids if they've heard about sexting and what they think about it. You might not get a straight answer but you'll open up a dialog that can go a long way toward helping your kids understand how to minimize legal, social and reputation risks.

There are more tips on ConnectSafely.org, a non-profit Internet safety site I help operate.

Boy, am I glad the Internet and camera phones weren't around when I was a kid.

By Tuesday night, Isaias had weakened, with maximum sustained winds around 50 mph.