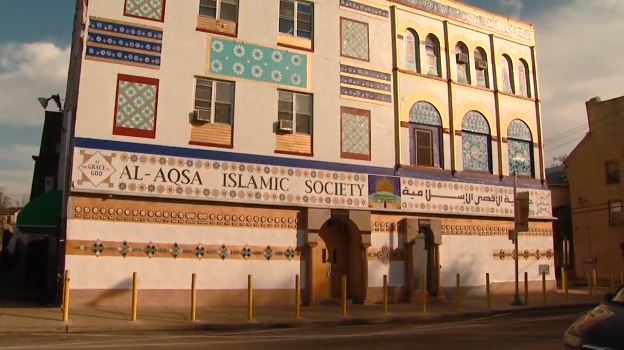 PHILADELPHIA - The caretaker at a Philadelphia mosque said he found a severed pig's head on the sidewalk, and police said they were investigating the incident.

The caretaker told police he found the head near the door of the Al Aqsa Islamic Society when he arrived around 6 a.m. Monday. The facility is home to a school, a mosque and an interfaith community center.

Surveillance video showed to CBS Philadelphia shows a red pickup slowing down in front of the mosque on Sunday night. The truck then circles the block and an object was thrown from the passenger window as the vehicle passes a second time.

"The intent of that person was obviously a hate crime- it was an attempt to deface a religious institution," Marwan Kreidie of the Philadelphia Arab American Development Corporation told CBS Philadelphia.

He said the first time Al-Asqa received an act of hate was shortly after the Paris attacks when they received a voicemail that stated: "Allah... is a peace of pork [expletive]! Allah Sucks!""

And now with this latest incident, Kreidie said, "a pig's head doesn't do much physically, but the next thing could be a pipe bomb."

Neighbors said they are shocked and saddened by the incident.

"I feel bad that it's happened. I'm glad it doesn't happen often," Aisha Yasin, who lives near Al-Asqa said.

"We live here together. Christians, Muslims, Jewish and this is free country," said Joe Bouaissa, who works at nearby Germantown Pizza.

Kreidie says managers at Al-Asqa are upping security and have contacted law enforcement as tension continues.

"Attacks on any religious institution is an attack on all of us. We want people to know, we are not scared. We are part of the community," Kreidie said.

Administrators from the Al-Asqa Islamic Society say they've also contacted the FBI, the Department of Justice and the Philadelphia Human Relations Commission, asking for an investigation into this incident as a hate crime.

The Quran, the holy book of Islam, prohibits Muslims from eating pork, and pigs have been used to taunt or offend Muslims. Last year, attackers in Greece placed a severed pig's head and painted anti-Muslim slogans outside an Islamic studies center in Athens.

The incident in Philadelphia was condemned by Mayor-elect Jim Kenney.

"The bigotry that desecrated Al-Aqsa mosque today has no place in Philadelphia. The City of Brotherly Love and Sisterly Affection has a long history of coming together in the face of challenge," Kenney said in a statement Monday night.