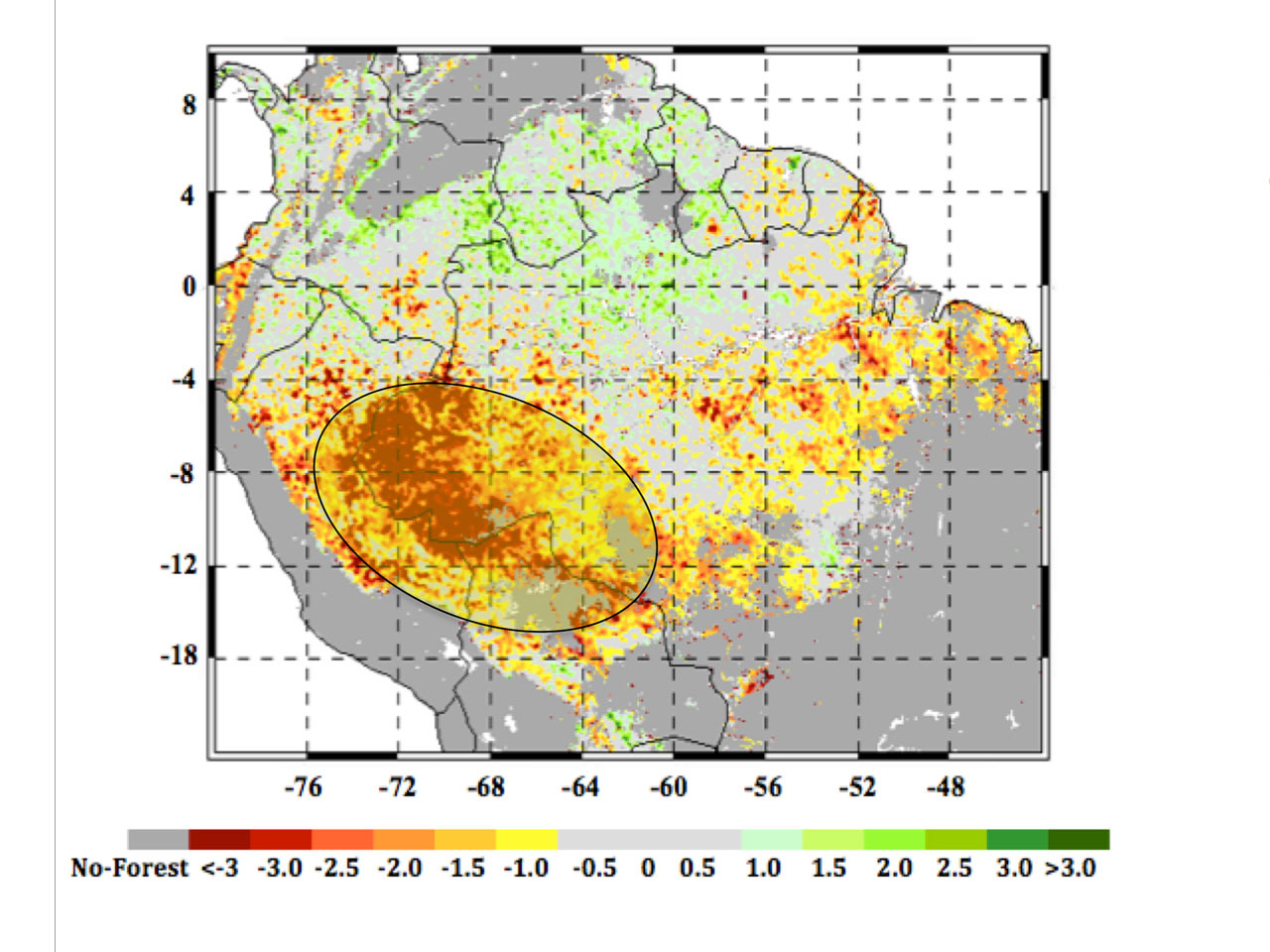 An area in the Amazon twice the size of California is experiencing what scientists call a "megadrought." The prolonged drought, which began in 2005, has caused widespread damage to the area and may possibly be a sign that the rainforest is showing the first signs of large-scale degradation due to climate change.

A research team, led by NASA's Jet Propulsion Laboratory, analyzed nearly a decade of satellite data over the Amazon. The team looked at rainfall measurements and the moisture content of the forest canopy.

The most striking data came from the summer of 2005, when 270,000 square miles of forest experienced a severe drought that caused widespread, observable damage to the canopy. The drought conditions were so severe that the rainforest was unable to fully recover before the next drought struck in 2010.

"The biggest surprise for us was that the effects appeared to persist for years after the 2005 drought," Yadvinder Malhi of Oxford University and co-author of the study said in a press release. "We had expected the forest canopy to bounce back after a year with a new flush of leaf growth, but the damage appeared to persist right up to the subsequent drought in 2010."

The two extensive droughts - called a "double whammy" by one researcher - could mean the region, known as Amazonia, will suffer long-lasting damage. It is also more evidence for the increasingly clear fact that the Amazon is receiving less and less rainfall per year.

Observations from ground stations in the southern Amazon have found that average rainfall in the region dropped nearly 3.2 percent per year in the period from 1970 to 1998. Climate analyses from the period from 1995 to 2005 also show a steady decline in water availability in the forest. This prolonged period of below-average rain may have exacerbated the damage caused by the current megadrought.

Tropical forests, home to countless animal and plant species, are considered some of the most diverse areas on the planet. Rainforests are sensitive ecosystems, and the reduced rainfall has had a noticeable impact on the region. Satellite and ground data has found an increase in wildfires and tree die-offs following droughts.

"Our results suggest that if droughts continue at five- to 10-year intervals or increase in frequency due to climate change, large areas of the Amazon forest are likely to be exposed to persistent effects of droughts and corresponding slow forest recovery," said NASA scientist Sassan Saatchi, lead researcher of the study. "This may alter the structure and function of Amazonian rainforest ecosystems."

Results of the study were published in Proceedings of the National Academy of Sciences.