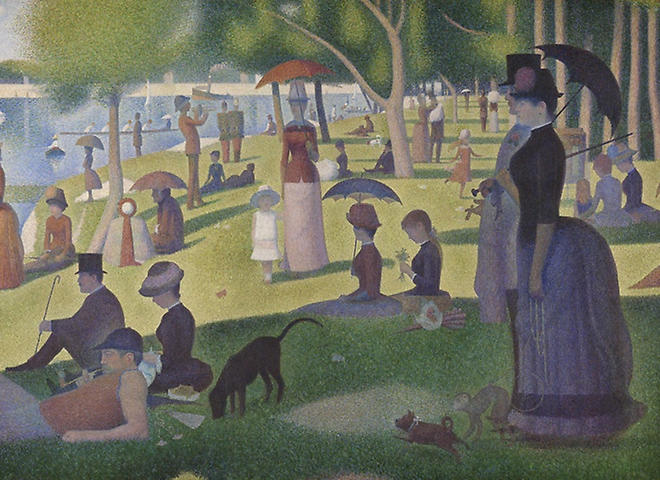 Georges-Pierre Seurat was born in 1859. He was just 31 when he died, but in his short life, he would change the course of modern art with one painting - simply by taking a walk in the park, reports CBS News correspondent Cynthia Bowers.

He called it "A Sunday on La Grande Jatte," an island in the Seine River on the outskirts of Paris. In the 1880s, it was a pleasant retreat from the city - a popular destination for fishing, boating, picnicking, and promenading. It was a place to see and be seen.

It is the centerpiece of "Seurat and the Making of La Grande Jatte," on view at the Art Institute of Chicago.

The exhibit is the result of work by scholars and scientists. With the help of x-ray, infrared and high-resolution color images, the Art Institute now has a better sense of the story behind "La Grande Jatte."

Curator Druick Druick says, "He gives us a sort of timelessness, and I think that's the quality people respond to in the picture, the sense of a moment, an identifiable moment, a moment in time, which was in a way for all time."

That moment in time has become one of the most enduring images in the history of art. It's graced coffee mugs and handbags. It's been reproduced on magazine covers and catalogues. It's been put to music in Stephen Sondheim's "Sunday in the Park with George." It even had a cameo in the hit film "Ferris Beuller's Day Off."

Curator Groom Groom says, "We're almost desensitized to it because we know it so well. And what we're trying to do with this exhibition is... get beneath its skin and really look at how it was made and what that tells us about the artist."

Georges Seurat was born in Paris into a middle-class family. At 19, he enrolled in the prestigious Ecole des Beaux-Arts and left after 18 months to complete his mandatory year in the military, only to return to Paris.

Druick says, "And at the end of 1880, so he's just 21 years old, he decides he will pursue a career in art, but he will do it himself. His will be a course of self-study. And what he says later of this period is: 'I found myself by studying others.'"

Using black chalk, he devoted himself to drawing. He looked to Rembrandt, Goya and Daumier for inspiration, and by 1881, he started to paint.

"He takes on different aspects of different people like the Barbizon artists," says Druick, "Showing people at work, such as [a] figure breaking stones. But very quickly, what he does is he starts looking at the Impressionists."

By the 1880s, Impressionism was considered the vanguard style in French painting, with painters like Edgar Degas, Camille Pissarro, Claude Monet, and Renoir.

"Suddenly he's working in color. And how is he working in color?" says groom. "He's simply trying to use what the Impressionists and other artists have been doing, which was not to have paint strokes very small so that it makes a glassy surface, but rather break up the brush work so that you have kind of this crisscrossing effect."

It led to "Bathing Place: Asnieres." Its subject - working class men and boys resting on the bank of the Seine River - was entirely different from the leisure paintings by Monet and Renoir from around that time. And unlike the Impressionists, Seurat made studies.

It was a hint of things to come:

"What Seurat was trying to do was both align himself with vanguard painting," says Druick. "But also, very clearly, mark his difference from it so that he was there in order to make a reputation in a way, which distanced himself from Impressionism while building on it and chart a new course."

He succeeded with his masterpiece, "A Sunday on La Grande Jatte."

Everything about this painting - its sheer size, the preparation that went into it, the almost frozen figures - was against what the Impressionists believed in, a world full of wonder, excitement and movement.

Seurat was not capturing a moment, as the Impressionists did; he was creating one.

"He gets to exhibit with the impressionists through Pissarro who actually comes around to his way of thinking about what art should be. But you know degas makes the comment that he would have noticed it, but it was just so big. Obviously it was a slap in the face to a generation of artists who had found their way in a completely different mode of painting," says Groom.

Critics of the day called it pointillism - French for "stitch." It became Seurat's signature style:

"If you're this far away, it's absolutely perfect and you do feel a sense of being there. And the closer you get up to it, the more you're aware of this intricate and very complicated... application of specks and color."

"As you can see in all of these, it's the same sliver of the island. He knows how much water is going to be in it. He knows basically where the horizon line is. Where the people are going to be scattered," says Groom.

This one painting marks the end of Impressionism and the birth of a new movement - Neoimpressionism. Joining Seurat were his friends and contemporaries, painters like Camille Pissarro, Pissarro's son, Lucian, and Paul Signac.

It was the beginning of a new era in painting:

"It was such a revolutionary technique everyone had to notice it. Gauguin had to respond to it", says Groom. "Van Gogh starts doing pointillist paintings... So by the time you get to Matisse and Picasso, you have these wonderful evocations of classical art, timelessness, and a new technique. So big scale, monumental scale. This continues throughout the 20th century."

In his final works, he begins moving in new directions, says Druick. "Where those directions would have ultimately led, we don't know. He painted some wonderful pictures After La Grande Jatte... But La Grand Jatte remains the definitive picture for which he will be ultimately remembered."

He completed this picture at the age of 26.

In March of 1891, George Seurat developed malignant diphtheria, an acute respiratory disease. He died three days later at the age of 31.

Just a few years after his death, his friend, painter Paul Signac, wrote, "I feel that he gave everything he could give, and admirably at that… What more can one ask of an artist?"