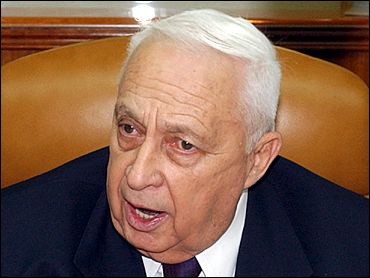 Israeli Prime Minister Ariel Sharon staked out tough positions on Jewish settlements, suggesting in remarks published Tuesday he will try to hold on to much of the West Bank's heartland.

Sharon spoke after Secretary of State Colin Powell failed to win Israel's acceptance of a new Mideast peace plan, and days before the Israeli leader was to meet his Palestinian counterpart, Mahmoud Abbas, in the first summit in nearly three years.

Sharon told The Jerusalem Post daily newspaper in an interview that Israel would hold on to some settlements in the heart of the West Bank, including Beit El, Ariel and Emmanuel.

Israeli control over those areas would make it extremely difficult to establish a territorially contiguous Palestinian state in the West Bank, a goal of the U.S.-backed peace plan, the so-called "road map."

Asked whether Jews would continue to live in Beit El, a settlement just north of the Palestinian town of Ramallah, Sharon said, "Jews will live there."

When asked whether they would be under Israeli rule, he said, "Do you see a possibility of Jews living under Arab sovereignty? I'm asking you, do you see that possibility?"

Sharon appeared to be reversing himself. In an interview with the Haaretz newspaper last month, he suggested that Israel was ready to part with West Bank areas of biblical significance, citing Beit El and Shilo.

"It seems that Sharon did not read the road map plan," said Nabil Abu Rdeneh, an aide to Palestinian leader Yasser Arafat, who is being excluded from the peace process by both Israel and the United States. "He (Sharon) should also understand that any final solution will not happen without removing all illegal settlements."

Sharon will discuss his objections to the plan with President Bush at the White House next week.

Powell said during his weekend visit that settlements would be an issue in the Sharon-Bush talks. The road map demands that Israel dismantle dozens of smaller West Bank outposts and freeze all construction in the 150 veteran settlements in the first stage of the plan.

In other developments Tuesday, police arrested the leader and 14 members of Islamic Movement, the largest Arab political group in Israel, on suspicion they funneled millions of dollars to Hamas.

In new violence, Palestinians fired mortar shells at an army base in the Gaza Strip, injuring 10 soldiers. In the West Bank, troops blew up a carpentry shop in an apartment building, saying it served as an explosives lab. The blast and subsequent fire damaged eight apartments.

In the Post interview, Sharon said two large settlements in the heart of the West Bank, Ariel and Emmanuel, would be on the Israeli side of a barrier now under construction to keep out Palestinian militants. This would mean that significant parts of the West Bank would be west of the barrier — on the side connected to Israel proper.

Sharon reiterated his support for the idea of Palestinian statehood, and said Israeli troops eventually would leave West Bank towns they occupied in the past year in response to shooting and bombing attacks.

"I don't think we can continue to control another people," he said. "I think it is bad for us, and bad for the Palestinians. How long can we continue to sit in all those cities?"

The Israeli leader has suggested in the past — though never formally — that the Palestinians could have about half of the West Bank, composed of disconnected islands of land, as an interim solution lasting many years.

The Palestinians have rejected the idea, saying they are entitled to all the West Bank, Gaza Strip and east Jerusalem, the areas Israel captured in the 1967 Mideast war.

The road map calls for an end to Israeli occupation and is based partly on an Arab peace initiative that offers comprehensive peace in exchange for an Israeli withdrawal from all occupied lands.

"What is needed right now is an immediate resumption of negotiations and unconditional acceptance of the road map if Sharon is interested in peace in the Middle East," Rdeneh said.

Sharon has refused to see Arafat, and the United States has accepted Sharon's boycott of the veteran Palestinian leader, charging that Arafat is involved in Palestinian terrorism. Mr. Bush has never met Mr. Arafat while in office.

Palestinians have accepted the road map, a three-stage blueprint starting with an end to violence, Israeli army pullbacks and a halt in settlement building in the West Bank and Gaza Strip. It then allows for a Palestinian state with provisional borders — perhaps by the end of the year — and hopes to resolve tough issues like borders, Palestinian refugees and Jerusalem in the last stage.

The first phase of the roadmap calls for Israel to dismantle settlements erected since March 2001 and freeze all new settlement activity. It leaves the thornier issue of what to do about older settlements to negotiations.

Numerous United Nations resolutions have ordered the dismantling of Israeli settlements, which some say violate the Geneva Conventions on treatment of occupied territories. Israel says the conventions do not apply.