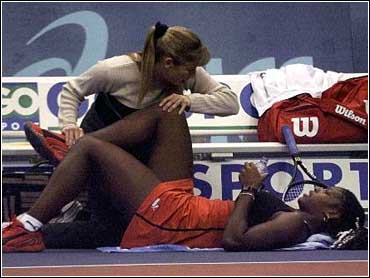 Grimacing and barely able to walk, Serena Williams hobbled through the Paris Open final on Sunday before losing 7-5, 6-2 to Nathalie Tauziat.

Williams, the 18-year-old defending champion, wiped away tears at times. She injured a ligament in her right knee during the sixth game of the first set and was hampered the rest of the match.

Williams felt pain whenever she put weight on her right leg. She had her knee wrapped between sets.

"All of a sudden I felt it go," said Williams, the top-seeded player in the $537,000 tournament. "The longer things went, the worse it was. I had the same problem last year at this time, like tendinitis, but I haven't had it since."

The level of tennis dropped as the second set wore on and Williams' injury became more apparent.

"If she's injured, it's good Serena stayed out there," Tauziat said. "It proves she's a real champion."

Williams hopes to play in Hanover, Germany, this week, beginning Wednesday or Thursday.

"It was really tough," the U.S. Open champion said. "I could hardly walk. It was all I could do to stay out there."

Tauziat, seeded second, took control after the injury. The 32-year-old Frenchwoman is the oldest player on the tour.

"I really applaud Nathalie for what she's doing," Williams said. "It's pretty fantastic to be playing your best tennis at 32. No way can I see myself doing that."

Taziat earned $87,000 for the victory. Her ranking on Monday will advance to No. 5, her best in 16 years on tour. She has won three tournaments in four months. This was her seventh career title.

She is expected to retire at the end of the year, but those plans could change.

"Winning here in front of my own public is the best thing to happen to me," she said. "And Wimbledon remains my goal. I'll decide the rest at the end of the year."

Tauziat broke for a 6-5 lead in the first set. She served out for 7-5 after coming back from 0-40 and staving off four break points in the 12th game.

Williams was broken in the opening game of the second set and almost lost two successive service games when Tauziat missed three break points for 3-0. Williams held to make it 2-1.

Tauziat saved a break point at 3-2, but Williams lost serve for the second time in the set to trail 5-2. The Frenchwoman served out for victory, with Williams sending a backhand long on match point.