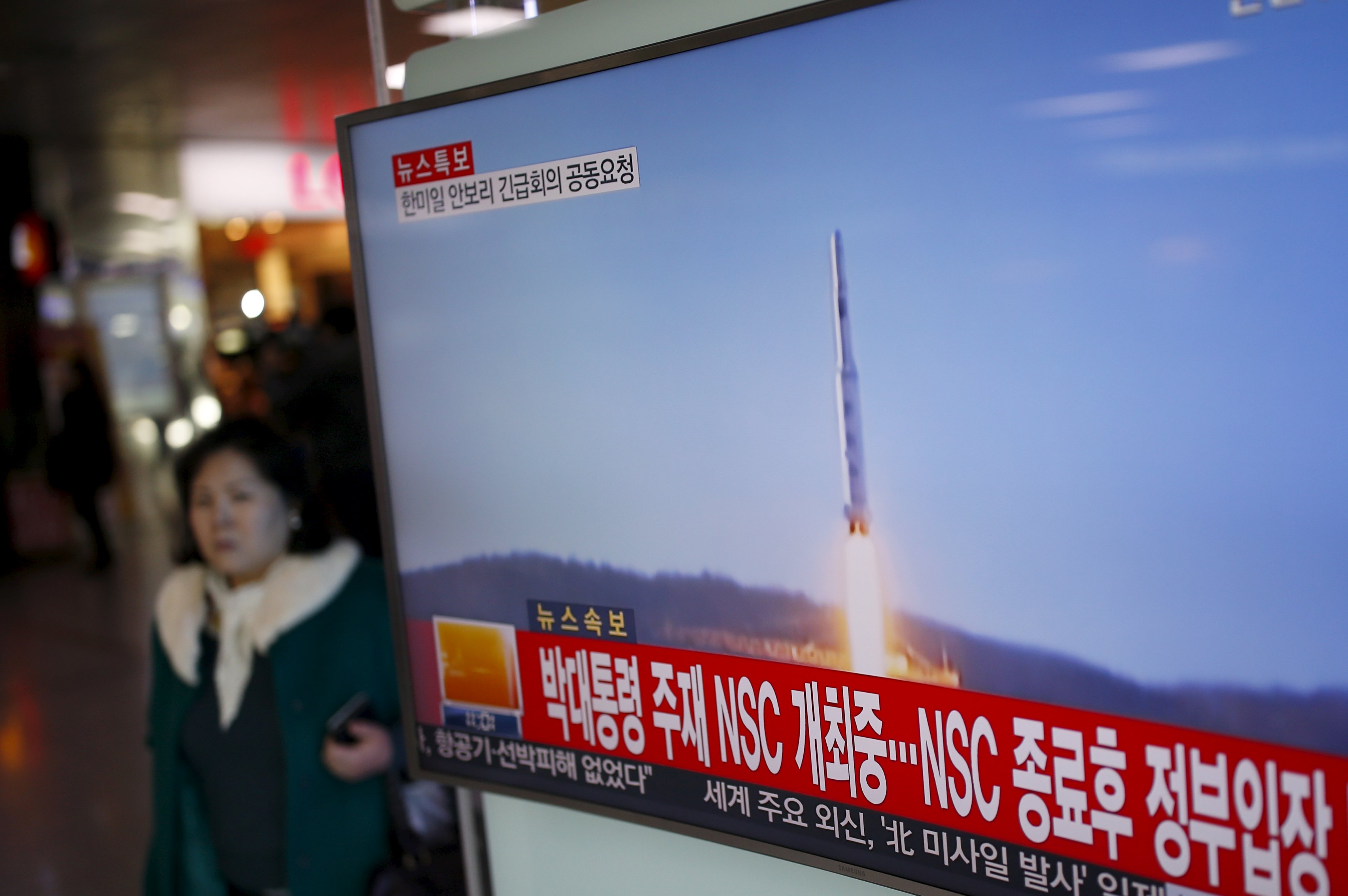 SEOUL, South Korea -- North Korea on Sunday defied international warnings and launched a long-range rocket that the United Nations and others call a cover for a banned test of technology for a missile that could strike the U.S. mainland.

The rocket was fired from North Korea's west coast and tracked separately by the governments Japan and South Korea, which immediately convened a an emergency national security council meeting. South Korean media reported that the rocket may have failed, but provided no other details. The South Korean government couldn't immediately confirm the reports.

The launch, which South Korean officials confirmed about two hours after an eight-day launch window opened Sunday morning, follows North Korea's widely disputed claim last month to have tested a hydrogen bomb. It will be considered a further provocation by Washington and its allies and likely draw more sanctions and condemnation from the United Nations.

In a statement, North Korea's National Aerospace Development Administration, in typical propaganda-laden language, praised "the fascinating vapor of Juche satellite trailing in the clear and blue sky in spring of February on the threshold of the Day of the Shining Star." Juche is a North Korean philosophy focusing on self-reliance; the Day of the Shining Star refers to the Feb. 16 birthday of former dictator Kim Jong Il. North Korea has previously staged rocket launches to mark important anniversaries.

Defense Ministry spokesman Moon Sang Gyun said a South Korean Aegis-equipped destroyer detected the North Korean launch at 9:31 a.m. The rocket's first stage fell off North Korea's west coast at 9:32 a.m. and the rocket disappeared from South Korean radars at 9:36 a.m. off the southwestern coast. There was no reported damage in South Korea.

The South Korean government couldn't immediately confirm reports by Yonhap news agency and YTN TV that the rocket might have failed.

The U.S. Strategic Command issued a statement saying it detected and tracked a missile launched on a southern trajectory but it did not pose a threat to the United States or its allies.

Japan's NHK broadcaster showed footage of an object visible in the skies from the southern island of Okinawa that was believed to be the rocket. Japanese chief Cabinet spokesman Yoshihide Suga told reporters that no debris fell on Japanese territory.

"We absolutely cannot allow this," he told reporters at the prime minister's residence. "We will take action to totally protect the safety and well-being of our people."

Kerry said it was the second time in just over a month that North Korea has chosen to conduct "a major provocation, threatening not only the security of the Korean Peninsula, but that of the region and the United States as well."

He reaffirmed Washington's "ironclad commitment to the defense of our allies, including the Republic of Korea and Japan."

"It is deeply deplorable that the Democratic People's Republic of Korea (DPRK) has conducted a launch using ballistic missile technology in violation of relevant Security Council resolutions on 6 February 2016 despite the united plea of the international community against such an act," a spokesman for U.N. Secretary General Ban ki-Moon said a statement.

"The Secretary-General reiterates his call on the DPRK to halt its provocative actions and return to compliance with its international obligations. He reaffirms his commitment to working with all sides in reducing tensions and achieving the verifiable denuclearisation of the Korean Peninsula," the statement said.

The Foreign Ministry in China, the North's only major ally and protector in the U.N. Security Council, where Beijing wields veto power, expressed "regret that, disregarding the opposition from the international community, the (North) side obstinately insisted in carrying out a launch by using ballistic missile technologies."

U.S. National Security Adviser Susan Rice said in a statement that "North Korea's missile and nuclear weapons programs represent serious threats to our interests -- including the security of some of our closest allies -- and undermine peace and security in the broader region."

The United States and Japan requested an emergency meeting of the U.N. Security Council on Sunday morning. Their request said that North Korea has violated a Security Council ban on ballistic missile launches.

Kerry said the U.S. will continue to work with its partners and members of the U.N. Security Council on significant measures to hold North Korea to account.

Kim Jong Un has overseen two of the North's four nuclear tests and three long-range rocket tests since taking over after the death of his father, dictator Kim Jong Il, in late 2011. North Korea says its rocket launches are satellite missions, but the U.S., South Korea and others say they are a covert test of ballistic missile technology.

The Jan. 6 nuclear test has led to another push in the U.N. to tighten sanctions. North Korea in 2013 also did a nuclear test and then unnerved the international community by orchestrating an escalating campaign of bombast, including threats to fire nuclear missiles at the U.S. and Seoul.

The Korean border is the world's most heavily armed and the rivals' navies occasionally trade gunfire near a disputed boundary in the Yellow Sea.

It is thought to have a small arsenal of atomic bombs and an impressive array of short- and medium-range missiles. But it has yet to demonstrate that it can produce nuclear bombs small enough to place on a missile, or missiles that can reliably deliver their bombs to faraway targets.

North Korea has said that plutonium and highly enriched uranium facilities at its main Nyongbyon nuclear complex are in operation. The country is thought to have a handful of rudimentary nuclear bombs but there is debate about whether it is capable of building warheads small enough to mount on a missile that could threaten the United States.

North Korea has spent decades trying to perfect a multistage, long-range rocket. After several failures, it put its first satellite into space with a long-range rocket launched in December 2012.

Under Kim Jong Un, a February 2012 deal for the United States to provide 240,000 metric tons of food aid in exchange for a freeze in nuclear and missile activities collapsed after a rocket launch by the North that April.