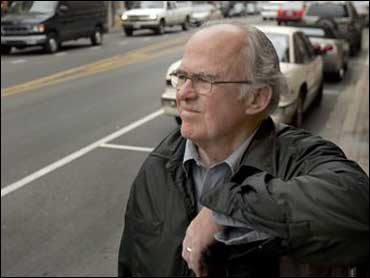 Web logs, more often the domain of alienated adolescents and middle-aged pundits, are gaining a foothold as a new leisure-time option for senior citizens.

"It's too easy to sit in your own cave and let the world go by, eh?" said Ray Sutton, the 73-year-old Oldest Living Blogger and a retired electrician who lives in Vancouver, British Columbia. "It keeps the old head working a little bit so you're not just sitting there gawking at TV."

Web logs, or blogs, are online journals where people write about anything and everything that interests them. Blogs tend to be topical, and typically offer links to other Web sites, photos and opportunities for readers to comment.

Bloggers say their hobby keeps them up on current events, lets them befriend strangers around the globe and gives them a voice in a society often deaf to the wisdom of the elderly.

"It brings out the best in me," said Boston-area blogger Millie Garfield, 80, who writes My Mom's Blog with occasional help from her son, Steve Garfield, a digital video producer. "My life would be dull without it."

And it's brought her a bit of fame.

In June, Garfield was invited to speak at a Boston seminar for marketers on how to use the Web more effectively. A short video of the event, posted on her blog, captures the professionals laughing at her wisecrack about the benefits of a man who can still drive at night.

Sutton, the Oldest Living Blogger, has also enjoyed some limelight. He was asked to take part in a talk radio debate on a controversial high-voltage power line after he posted his views about it on his blog.

Joe Jenett, a Detroit-area Web designer who has been tracking the age of bloggers for a personal venture called the Ageless Project, said he has noticed more older bloggers in the past two years.

"Isn't that phenomenal? And their writing is vibrant," Jenett said. He noted that sites such as Blogger.com give step-by-step instructions and free hosting, making it simpler to self-publish on the Web.

"It's easy to start one if you can connect dots," said former Jesuit priest and retired newspaperman Jim Bowman, 73, of Oak Park, Ill.

Bowman writes four regular blogs: one on happenings in his city, one a catchall for his opinions, one on religion and one offering feedback on Chicago newspapers. Bowman once had eight separate blogs, but has let some lapse. The blog topics he doesn't keep up with anymore include ideas for sermons, Chicago history and condominium life.

"Like any other hobby, you've got to make sure it doesn't take over," he said.

Mari Meehan, 64, of Coeur d'Alene, Idaho, has been blogging since July. It's given her a voice in her small resort town where, as a relative newcomer, she felt rebuffed.

Inspired by other local bloggers she'd found on The Spokesman-Review (Spokane, Wash.) newspaper's Web site, Meehan discovered it was easy to get started.

"If you can read, you can do it," she said. She titled her blog Dogwalk Musings, based on the premise that she would write about her thoughts during morning walks with her St. Bernard, Bacchus. Her posts range from nature sightings of a kildeer's nest with four eggs to rants about local and national politics.

When readers started mentioning Dogwalk Musings as one of their favorites on a newspaper columnist's blog, Meehan said she felt compelled to post every day.

But now she's backing off. "Lots of times, I'll walk away from it for three or four days," Meehan said. "I'm not going to let it take over."

Response from blog readers does keep many older bloggers returning to their keyboards day after day. If they skip a day, readers will e-mail the older bloggers, asking if they're sick.

"You'd be surprised how many questions I get during the tomato season," he said. "There's always somebody having a problem."