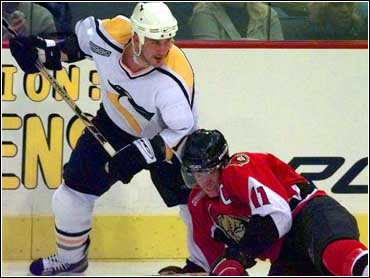 The Pittsburgh Penguins must be trying to tie their way into the playoffs. Without Jaromir Jagr, they're certainly not going to get there with offense like this.

Struggling again without the injured Jagr, the Penguins got only 17 shots and few good scoring chances in a 1-1 tie with the Ottawa Senators on Monday night.

The Penguins are 0-2-2 since Jagr injured his hamstring a week ago Monday in Tampa and are 1-0-4 in their last five home games. Ottawa is 1-14-4 all-time in Pittsburgh.

"It was kind of boring hockey, I guess," said Pittsburgh's Martin Straka, who couldn't score on two breakaways. "They don't give you anything and kind of sit back and wait. I think we did the same thing. Just sit back and wait. But we got some chances at the end and they did, too."

Pittsburgh's Jean-Sebastien Aubin made the best save in the overtime, going to the ice to push his stick into Vaclav Prospal's stick on a breakaway, causing the puck to trickle harmlessly behind the goalie.

"That's why he couldn't shoot," Aubin said. "I pushed it (the stick) a little bit and the puck went just behind me but didn't go in."

About 30 seconds later, Straka had a breakaway of his own, but his shot deflected harmlessly off Patrick Lalime's blocking pad.

There's no faking the Penguins' problems without Jagr, who had surgery Friday on his injured left thigh and my not return for several more weeks. Pittsburgh is 1-5-3 overall without Jagr this season and has not scored more than three goals in its last 10 games.

"I thought we played a great defensive game," the Senators' Shaun Van Allen said. "We were really concentrating on that. We turned over the puck a couple of times, but Lalime made some big saves for us."

Both teams missed opportunities to improve their positions in the muddled Eastern Conference playoff race. Ottawa slipped three points behind fifth-place Washington, a 3-2 winner over the New York Islanders, and stayed six points ahead of Pittsburgh. The seventh-place Penguins only opened a two-point lead on the eighth-place New York Rangers.

The Penguins shook themselves from a lethargic start to take a 1-0 lead on Matthew Barnaby's eighth goal at 8:21 of the first.

With the Civic Arena crowd of 16,081 unusually quiet during a dump-and-chase start in which neither team generated any momentum, Barnaby suddenly broke free on a breakaway off Jan Hrdina's lead pass and put the puck between Lalime's pads.

Barnaby, never known as an offensive forward, has two goals and an assist in three games.

Lalime, the former Pittsburgh goalie who began his NHL career with a record-setting 14-0-2 start in 1996-97, settled down after that to make 16 saves and often went long stretches without having to make a play.

The Senators also had scarcity of scoring opportunities against Aubin, but finally tied it at 5:55 of the second on Andreas Dackall's fourth goal. Colin Forbes dug out the puck along the boards and fed up ice to Van Allen, who set up Dackall perfectly in front of the net.

Aubin was by far the more active of the two goalies, turning aside 32 shots in his 10th consecutive start in place of Tom Barrasso, who is on a personal leave. Barrasso's father died Monday night in Boston, and the goalie is not expected to rejoin the Penguins soon.

Ottawa had an excellent opportunity to seize the lead when the Penguins' German Titov drew a four-minute penalty for high-sticking Daniel Alfredsson at 12:20 of the third. But the Senators were held to three shots during the double minor, and Pittsburgh actually had the best scoring chance as Lalime stopped Straka's shot on a 2-on-1 short-handed break.