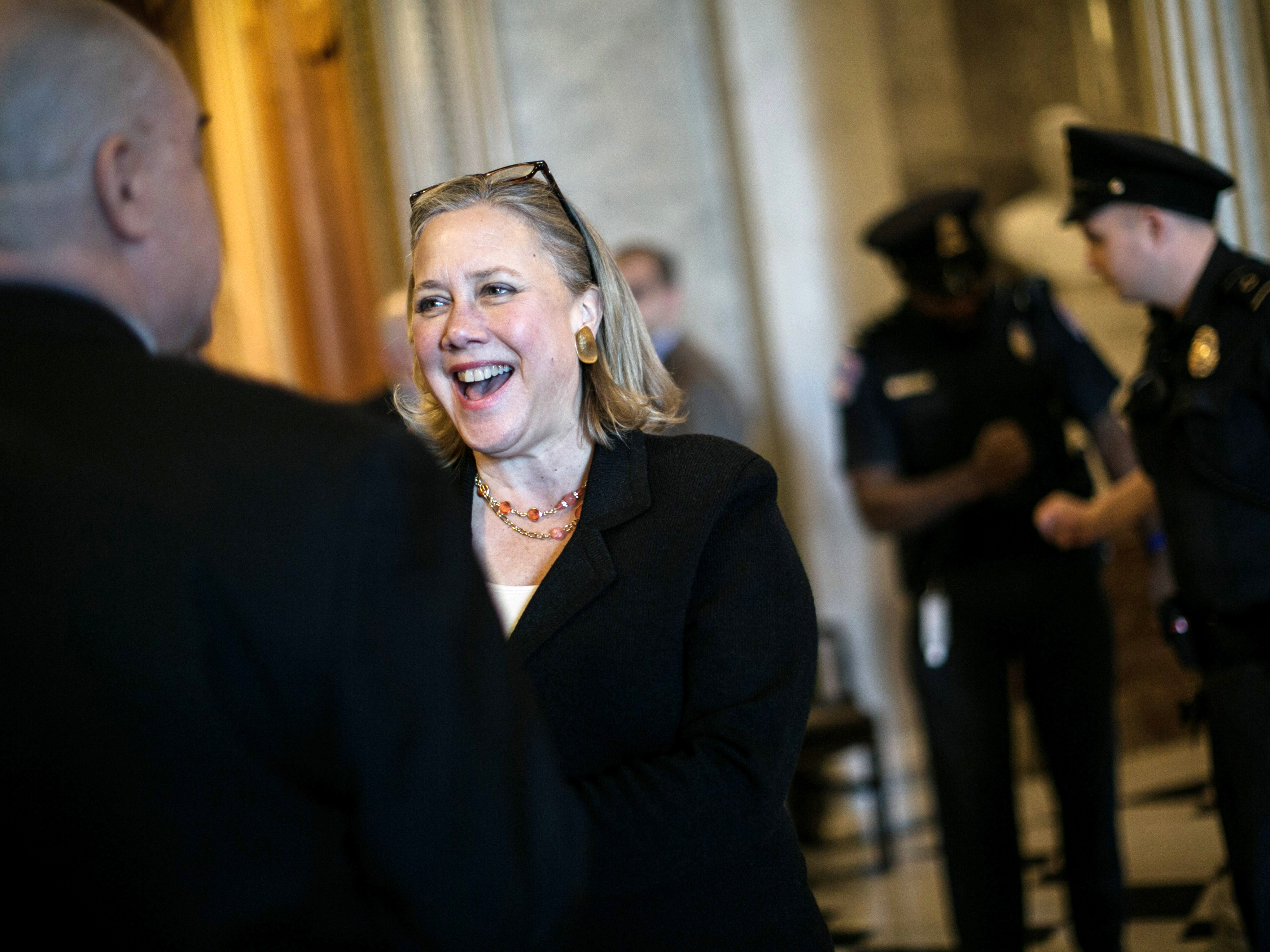 WASHINGTON An exhausted Senate gave pre-dawn approval Saturday to a Democratic $3.7 trillion budget for next year that embraces nearly $1 trillion in tax increases over the coming decade but shelters domestic programs targeted for cuts by House Republicans.

While their victory was by a razor-thin 50-49, the vote let Democrats tout their priorities. Yet it doesn't resolve the deep differences the two parties have over deficits and the size of government.

Joining all Republicans voting no were four Democrats who face re-election next year in potentially difficult races: Sens. Max Baucus of Montana, Mark Begich of Alaska, Kay Hagan of North Carolina and Mark Pryor of Arkansas. Sen. Frank Lautenberg, D-N.J., did not vote.

The vote came after lawmakers labored through the night on scores of symbolic amendments, ranging from voicing support for letting states collect taxes on Internet sales to expressing opposition to requiring photo ID's for voters.

The Senate's budget would shrink annual federal shortfalls over the next decade to nearly $400 billion, raise unspecified taxes by $975 billion and cull modest savings from domestic programs.

In contrast, a rival budget approved by the GOP-run House balances the budget within 10 years without boosting taxes.

That blueprint - by House Budget Committee Chairman Paul Ryan, R-Wis., his party's vice presidential candidate last year - claims $4 trillion more in savings over the period than Senate Democrats by digging deeply into Medicaid, food stamps and other safety net programs for the needy. It would also transform the Medicare health care program for seniors into a voucher-like system for future recipients.

"We have presented very different visions for how our country should work and who it should work for," said Sen. Patty Murray, D-Wash., who chairs the Senate Budget Committee. "But I am hopeful that we can bridge this divide."

A day that stretched roughly 20 hours featured brittle debate at times. The loudest moment came toward the end, when senators rose as one to cheer a handful of Senate pages — high school students — who lawmakers said had worked in the chamber since the morning's opening gavel. Senators then left town for a two-week spring recess.

"Both sides now will cool off because the next real crisis doesn't come until July, when we have to extend the debt ceiling," Greg Valliere, chief political strategist for Potomac Research, told CBS Radio News. "At that point, I think there's an environment that could give us a deal."

Congressional budgets are planning documents that leave actual changes in revenues and spending for later legislation, and this was the first the Democratic-run Senate has approved in four years. That lapse is testament to the political and mathematical contortions needed to write fiscal plans in an era of record-breaking deficits that until this year exceeded an eye-popping $1 trillion annually, and to the parties' profoundly conflicting views.

"I believe we're in denial about the financial condition of our country," Sen. Jeff Sessions of Alabama, top Republican on the Budget panel, said of Democratic efforts to boost spending on some programs. "Trust me, we've got to have some spending reductions."

Though budget shortfalls have shown signs of easing slightly and temporarily, there is no easy path for the two parties to find compromise — which the first months of 2013 have amply illustrated.

Already this year, Congress has raised taxes on the rich after narrowly averting tax boosts on virtually everyone else, tolerated $85 billion in automatic spending cuts, temporarily sidestepped a federal default and prevented a potential government shutdown.

By sometime this summer, the government's borrowing limit will have to be extended again — or a default will be at risk — and it is unclear what Republicans may demand for providing needed votes. It is also uncertain how the two parties will resolve the differences between their two budgets, something many believe simply won't happen.

Both sides have expressed a desire to reduce federal deficits. But President Obama is demanding a combination of tax increases and spending cuts to do so, while GOP leaders say they won't consider higher revenues but want serious reductions in Medicare and other benefit programs that have rocketed deficits skyward.

Mr. Obama plans to release his own 2014 budget next month, an unveiling that will be studied for whether it signals a willingness to engage Republicans in negotiations or play political hardball.

The amendments senators considered during their long day of debate were all non-binding, but some delivered potent political messages.

They voted in favor of giving states more powers to collect sales taxes on online purchases their citizens make from out-of-state Internet companies, and to endorse the proposed Keystone XL pipeline that is to pump oil from Canada to Texas refineries.

They also voted to voiced support for eliminating the $2,500 annual cap on flexible spending account contributions imposed by Mr. Obama's health care overhaul, and for charging regular postal rates for mailings by political parties, which currently qualify for the lower prices paid by non-profits.

In a rebuke to one of the Senate's most conservative members, they overwhelmingly rejected a proposal by Sen. Rand Paul, R-Ky., to cut even deeper than the House GOP budget and eliminate deficits in just five years.

The Democratic budget's $975 billion in new taxes would be matched by an equal amount of spending reductions coming chiefly from health programs, defense and reduced interest payments as deficits get smaller than previously anticipated.

This year's projected deficit of nearly $900 billion would fall to around $700 billion next year and bottom out near $400 billion in 2016 before trending upward again.

Shoehorned into the package is $100 billion for public works projects and other programs aimed at creating jobs.